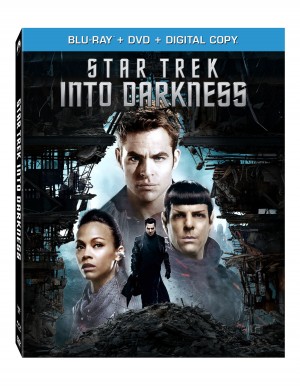 For years, I have railed against how often Paramount Pictures demonstrates their lack of understanding their Star Trek fans. One misguided decision after another dating back to the 1970s builds a fairly convincing case. The latest misfire is the release pattern to Star Trek Into Darkness, out on disc this week. In case you missed it, the combo pack includes the Blu-ray, DVD and Digital Copy we have all come to expect. You do get Bonus Materail on the Blu-ray disc, but it’s a mere 42 minutes of fairly perfunctory material, discussed a little later. On the other hand, there’s roughly another 60 minutes of features plus an audio commentary that exists but you have to be willing to buy retailer exclusive editions to get them or download the film from iTunes. Hopefully the outcry from consumers and failure to ignite massive sales to fans who must have everything will make this a one-time doomed experiment.

In a summer filled with disappointment, the release of the film is a reminder of what a squandered opportunity J.J. Abrams and Bad Robot had to sustain their reboot of the storied franchise. After making us wait four years, we get a fairly inept story with logic gaps the size of Qo’noS, raising themes but refusing to explore them in the Gene Roddenberry style, favoring action sequences that are prolonged and largely pointless. There are some very strong ideas presented here and given a surface presentation, not allowing the characters to chew over what it means to violate the laws and their oath or to interfere with a civilization’s destiny.

I09 has a brilliant deconstruction of the film’s major plot holes and I commend your attention over there. 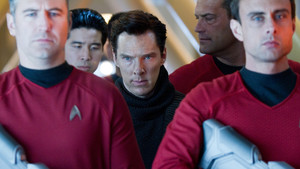 Screenwriters Alex Kurtzman, Roberto Orci and Damon Lindelof appear to have taken the most obvious traits the mass audience knows about James T. Kirk and ignored the rest. This means Chris Pine gets to play a hotheaded jerk who is all instinct and no intellect. Let’s compare: the TOS Kirk knew his ship inside and out, and kept current with the tech, otherwise he never would have known what to do to the deflector dish in Star Trek Generations. Pine’s Kirk kicked the hardware into place. Gary Mitchell chided Kirk for studying too hard, striving too hard to be perfect and still, Kirk had enough outside-the-box thinking to outthink the Kobyashi Maru test. Pine’s Kirk is smug and seems to skate through without effort. The television Kirk loved books and was pensive, quoting the Constitution of the United Sates and John Masefield. Pine’s Kirk gives us no clue he has such depth and dimension.

The biggest issue is how the Kirk approached the Prime Directive. On television, every time Kirk skirted or violated the law, it was for the good of the people (see Vaal, Landru) or to undo the contamination from other Starfleet personnel (see John Gill, Ron Tracy). In this film, the story starts with Kirk breaking the laws to save Spock’s life, a selfish, thoughtless act that led to his omitting vital information from Starfleet.

It’s as if the production crew at Bad Robot loved Star Trek without understanding it. The sloppiness in the plotting, what I termed a Swiss cheese script, is a deep shame given they took four years to write this disappointment and then tell us they waited for the right story to present itself.

By remaking Star Trek II: The Wrath of Khan, they demonstrated a complete misreading of why that film worked. We had invested sixteen years with these actors and characters so the themes of age and renewal, sacrifice and friendship worked. Here, we had to wait four years for a second installment and we’re still coming to terms with new actors in familiar roles so killing Kirk and making a big deal out of it fell flat. 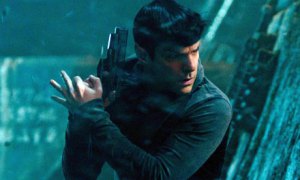 I’m also really tried of military-minded rogue Starfleet officers, too easy a plot device. (I didn’t quite get how the detonation of Vulcan meant it was time to start a war with the Klingons.) Peter Weller is wasted as the bad guy and the movie’s closing scenes totally ignore the questions his crimes raised. Let’s see: how did the conspiracy work? Were there others involved and have they been arrested? Where’s the dreadnought’s construction crew? With Starfleet command compromised, who is vetting the new command structure? Are we that much closer to war with the Klingons after Weller’s unsanctioned visit to Qo’noS (the proper spelling damn it).

Benedict Cumberbatch is brilliant and mesmerizing to watch. But his Khan is cold and apparently an enigma to the historians since no one troubled to look him up in the databanks. Instead, Spock-2 calls Spock-1 for the most pointless cameo yet. While the film is chockfull of winks and nods to the TV series it is distancing itself from, it doesn’t mention the Eugenics Wars or properly explain Khan’s amazing intellect and physique (he appears as invulnerable as Superman and has genesis blood so no one will ever die again).

After he craftily lures Starfleet’s brain trust into one room, he casually flies to HQ and opens fire. Here’s where I lost it. It’s a heightened security situation so they sit in a room full of windows and the airspace around Starfleet Command apparently isn’t patrolled. Similarly, two Federation ships cross the Klingon border and are undetected, then orbit the homeworld and remain undetected for a while. Really? The warrior race just lets anyone come visit?

The script had some terrific ideas buried under pacing that called for a loud, messy, lens-flare filled action sequence to interrupt every few minutes. It began to feel like a script written with an egg timer. The new characters are introduced and left to be underdeveloped so Admiral Marcus and his daughter, the curvaceous Carol, are pretty much cyphers while the supporting cast gets a few token moments of screen time. (Chekov being a transporter genius sort of makes sense since it’s an extension of navigation but being an engineering whiz stretches the point.) 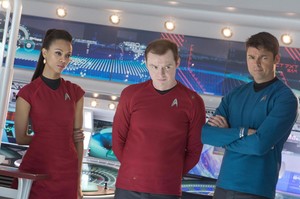 Michael Giacchino’s wonderful score and Cumberbatch salvage the film from being a complete misfire. We should be thankful that director J.J. Abrams will be a galaxy far, far away when the third film is prepped for the series’ golden anniversary in 2016. Maybe they can actually hire a script editor to smooth over the rough spots.

That said, the film transfer is stunning in its beauty. The 1080p, 2.40:1-framed image is rich with color and detail. Similarly, the Dolby TrueHD 7.1 soundtrack means business is just about flawless.

As for the paltry features, they’re all short and focus on elements of the production with cast and crew discussing how things were created or determined. While interesting, it all leaves you wanting more detail and information, especially Abrams’ conclusion that Khan was the most compelling opponent from the original 79 epsidoes, echoing Harve Bennett’s conclusion thirty years ago. He never addresses why they didn’t just create someone new.

Robert Greenberger is the author of Star Trek: The Complete Unauthorized History.