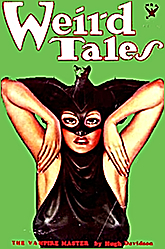 Generally speaking, when I’m reading a biography of a spectacularly talented popular culture artist I rarely encounter a lot of references to the Industrial Workers of the World. In the interest of full disclosure, I was a member of the IWW and I still fully sympathize with the heritage and the goals of the Wobblies. So there.

Irrespective of her personal history, Margaret Brundage’s pulp illustrations – mostly for Weird Tales – speak for themselves. They were spectacularly sensual, evoking the most base emotions in the true pulp tradition. That she was a woman made her work all the more unusual: back then, commercial illustration was very much an old boy’s club, and generally old W.A.S.P. boys at that. Then again, it is likely a man couldn’t get away with Brundage’s corporeal work.

Within a six-year period Brundage produced 66 covers for the vaunted magazine, including 39 straight issues. That’s quite an achievement, particularly given the fact that Weird Tales’ second most successful cover artist was Virgil Finley. Her run ended when the magazine was sold in 1938 and moved from Chicago to New York: her editor did not make the move, and NYC Mayor Fiorello La Guardia had started his infamous crackdown on sensuality in the public media and thus her work was regarded as a liability. The magazine’s circulation suffered from her absence. 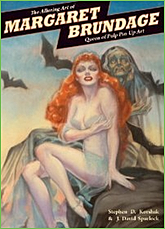 Throughout her Weird Tales period Brundage was married to a man named Slim Brundage, a character even by Chicago’s colorful standards. A hobo, labor organizer (for the IWW), playwright, writer, humorist, bootlegger and owner of a coffee house called College for Complexes, Slim was also a member of the Dil Pickle Club (sic), a hidden Towertown hangout for radical literati such as Clarence Darrow, Emma Goldman, Big Bill Haywood, Lucy Parsons, Upton Sinclair, Sherwood Anderson, Carl Sandburg and Ben Hecht. Google around; these are some of the most fascinating Americans ever. Margaret met Slim at the Dil Pickle; their marriage lasted until 1939 although that hardly ended her involvement with the left-wing intelligentsia.

Korshak and Spurlock’s book contains eight essays and an introduction from Rowena; again, in the interest of full disclosure, essayists include my friends and occasional cultural collusionists Robert Weinberg and George Hagenauer. They are all wonderful and worthy on their own.

But screw that. The main appeal is the faithful reproduction of an uncountable number of Brundage paintings. Well, that’s not true: I could count them, but each time I tried I got lost in the beauty of the work itself.

I’d like to say that without Margaret Brundage, there might not have been a Rowena, a Julie Bell, or a Olivia de Beradinis, but eventually talent supersedes silly obstacles such as gender. Sometimes.