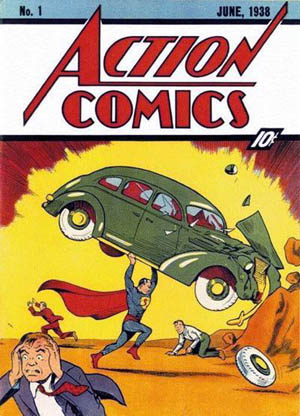 Because we can never have too many copies of Action Comics #1… the real one, no offense to Grant Morrison.

Michael Rorrer said his great aunt once mentioned having comic books she would one day give him and his brother, but it was a passing remark made when they were boys and still into superheroes.

Ruby Wright gave no indication at the time — and she died last February, leaving it unclear — that her late husband’s comic collection contained some of the most prized issues ever published. The 345 comics were slated to sell at auction in New York on Wednesday, and were expected to fetch more than $2 million.

Rorrer, 31, of Oxnard, Calif., discovered his great uncle Billy Wright’s comics neatly stacked in a basement closet while helping clear out his great aunt’s Martinsville, Va., home a few months after her death. He said he thought they were cool but didn’t realize until months later how valuable they were.

Rorrer, who works as an operator at a plant where oil is separated from water, said he was telling a co-worker about Captain America No. 2, a 1941 issue in which the hero bursts in on Adolf Hitler, when the co-worker mused that it would be something if he had Action Comics No. 1, in which Superman makes his first appearance.

“I went home and was looking through some of them and there it was,” said Rorrer, who then began researching the collection’s value in earnest.

He found out that his great uncle had managed as a boy to buy a staggering array of what became the most valuable comic books ever published.

“This is just one of those collections that all the guys in the business think don’t exist anymore,” said Lon Allen, the managing director of comics for Heritage Auctions, the Dallas-based auction house overseeing the sale.