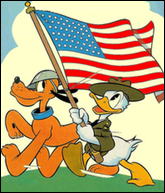 The mailbox is empty, Dad’s cleaning the grill, Mom’s making lemonade and the big flag is snapping and flapping in the wind. It’s a holiday, all right. The one that occurs in the middle of the hot weather – which one is that, again? Oh, sure – the Fourth. And what are we celebrating? Barbecued critter and socializing with the neighbors and, after dark, the big fireworks display down by the river? Well, no. Those are the ways we celebrate, not the reason. Then what? Something about the Declaration of Independence? Patriotism? Yeah, that’s it – patriotism!

Only problem with that is, exactly what does “patriotism” mean in a nation that’s as sadly divided as ours is, maybe more divided than at any time since the Civil War? Can a blue stater and a red stater stop bickering long enough to even agree on a definition of patriotism? Can we even agree on what questions to ask? Oh sure, the cable news channels will be full of marching bands and smiling politicians speaking words, but all that’s like the exploding rockets at the fireworks show, nothing more than flash and noise.

Maybe we should seek a reason for the celebration far, far back, before there was a United States of America, or governments, or what we call “civilization.” We’re patriotic for a reason and it’s not because we were taught that patriotism is a virtue.

No, we’ve got to blame it on evolution. Sorry, but we do. It’s really not too complicated: in the distant past, the prehumans who learned to live with others of their kind, to be mutually helpful, to cooperate, tended to stay off some beastie’s menu. The grouches didn’t last as long as the cooperators,who then had time to…you know – procreate. They had offspring who shared their sociability and pretty soon we had villages and tribes and maybe the beginnings of art and religion. But our early ancestors also learned to mistrust what they couldn’t recognize because their collective experience indicated that what they didn’t know might, in fact, hurt them. The result was us, who not only want to live in groups, but have a powerful tendency to identify with those groups. Cheering a local team, joining a lodge or a sodality or a political party or being proud of a certain citizenship – strip away rhetoric and rationalization and ego, get rid of the flash and noise, and you have a naked hominid suffering terror when he finds himself separated from his group.

Call it patriotism, and be proud of it. A cause for celebration? Sure.  But you might want to remember that it’s about cooperation more than mistrust. Red state, meet blue state, and pass the lemonade.