MINDY NEWELL: Happy Christmas! Merry Chanukah! And Festivus For The Rest Of Us! 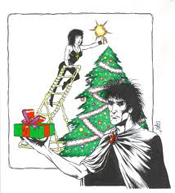 As a nice Jewish girl, I’ve always loved Christmas and Chanukah and Festivus for the rest of us.

We lived on a “not quite” cul-de-sac that had an island in the middle of the street. On that island was a huge old fir tree, and every holiday season all the “cul-de-sac’ers” would decorate it for Christmas. Yep, it was “National Brotherhood Week” on Hodges Place – I always wondered if the street was named for Gil Hodges of the Brooklyn Dodgers. I doubt it – this was on Staten Island, not Brooklyn – but it would make a nice story, wouldn’t it?

Anyway, my brother and I didn’t feel cheated in mid-December – like every snotty, young, selfish Jewish kid, Chanukah meant eight days of presents. And latkes ; potato pancakes for the uninitiated. But truth to tell, we also thought the story of the oil in the Temple miraculously burning for eight days was pretty cool, and the candlelight was so pretty. My brother and I didn’t lose on Christmas either.

Christmas Eve was when my mom took me, my brother, an done friend each into Manhattan for our annual visit to Rockefeller Center and the Christmas Tree, then to skate on the Rockefeller Center ice rink, then to Radio City Music Hall to see the movie and the Christmas show, then to walk down Fifth Avenue to see the fantabulously animated window, and finally to then meet up with our Dad at Macy’s, where we would all bundle into the car for a trip through the tunnel and home.  And once at home, bathed and tucked into bed – with visions of sugarplums dancing in our heads – dad and mom would hang Lord & Taylor’s, or Saks Fifth Avenue, or Bloomindales or B. Altman ‘s (yeah, I’m that old) shopping bags for Santa to fill – I guess jolly ol’ St. Nick was kosher, but real stockings were trafe.

So here’re some suggestions for your shopping bags and/or stockings, trafe or not. Some political – hey, it wouldn’t be my column with at least one political comment, would it? – and some not.

With our troops “officially” coming home from Iraq – my girlfriend is in the Army and she knows soldiers who have gotten marching orders to Baghdad to help protect the nearly 20,000 “diplomats” who will remain in the Emerald City Otherwise Known As The United States Embassy, it’s time for you to really understand how the fuck we got involved there in the first place.

As for me? What do I want for Christmas, Chanukah, and Festivus for the rest of us? Oh, say, it’d be nice to part of the 1%, wouldn’t it? C’mon, you know you’d like it, too. I’m joking. (Or am I?) A guarantee that President Obama will have a second term, this time with a Congress that’ll work with him instead of demonizing everything about one of the smartest men to ever hold the office. Barring that, a Presidency for Hillary – and yes, I know she said she’s done with politics after winding up her term as Secretary of State. To write Wonder Woman again.

Peace on Earth, Goodwill to Men.