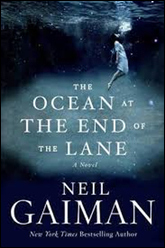 Neil Gaiman’s latest work, The Ocean at the End of the Lane, began as a short story and unexpectedly grew into a novella and then a novel. Neil also wasn’t sure at first whether it was going to be a story for children or adults, since much of the story, while narrated by an adult, takes place when the protagonist is seven years old. Finally the marketing dial landed on “adult;” and that makes sense, for the most part.

There is a lot of darkness in this book, which is also of a more personal or intimate nature than some of Neil’s more fantastical works. There is more of “Neil” (himself) in it as well; not in that it is his autobiographical experience, but in that it was born more truly from his personal history. This makes Ocean feel more solidly rooted in, not the almost-realistic fantasy world of many of his stories, but an almost-fantastical reality instead. The fantasy elements are tied so tightly into some pretty ugly human truths that it might be easier to view this book as reality through the eyes of an imaginative child now grown into adulthood than as a fantasy adventure.

And yet, despite the darkness and ugliness that are frequently present, there is light in this book as well, and comfort. In the Hempstocks, a solidly reliable family of women who “know things,” and are comfortably situated on the side of all that is warm and good and naturally right; in an adult’s memories of childhood haunts, which can be as bright as they are at other times dark; and in the more lighthearted flights of fancy, such as the discovery of some very unique kittens in a field. This is a book that faces darkness but also “takes pleasure in small things, even as greater things crumble.” It reminds adults of a time when they were children and took a child’s pleasure in the small things.

Yes, this is a book that will be enjoyed by adults; and yet despite, or in fact possibly because of some very intense and disturbing scenes, mostly involving the narrator’s father or Ursula Monkton, this is indeed also a book that I would have enjoyed as a child. Children’s worlds are not always made of sunshine and unicorns, much as we’d like them to be. They are often at least a little dark and twisty – whether that darkness originates in the home, or in the schoolyard, or elsewhere. From experiences like a childhood birthday party which none of our classmates attend; to the frustrations and helplessness of dealing with a controlling adult; to the threatened or actual dissolution of a nuclear family, children often experience darkness without any prior experiences to ready them for it, or guidance on how to deal with it.

For children who read, books can serve as a guide; or an assurance that one is not alone in the darkness, and that there is someone else out there who understands what it’s like to be a child in a world of adult things that are as yet only half understood. Books can be an escape, but they can also help children face realities. And books can be a comfort, when the darkness inherent in the story is balanced by light. This is one of those books that might serve these functions; for the right sort of child.

So is this a story for adults or children? Well, both. It is a book of many layers that can be approached from many angles. It is a thought-provoking story, and one that is worth re-reading and thinking about. It is a book that could be about a wondrous and frightening adventure; or about looking back at childhood through the eyes of an adult and realizing how past experiences have shaped you; or even a reminder to adults of the way our actions will impact our children, who are our responsibilities. It might also be an assurance that even if you’ve been through a childhood that gave you a hole in your heart – in which adults fought children, and the adults won, or in which your kitten was lost to you and any replacement for it was never your kitten again – you can bear it, and gradually heal, and never stop becoming a little more whole again.

There is so much substance to this short novel that I could write about what it is or is not for a long time. Instead, I recommend that you go and read it. 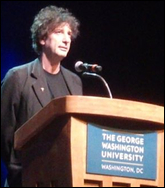 As I’ve mentioned before, this is a particularly prolific year in the life of Mr. Neil Himself. Possibly in reaction to all of the busyness, Neil decided to do a massive signing tour for The Ocean at the End of the Lane, after which he plans to take a long and well-deserved break from such events.

Washington, DC was the fourth stop on the tour, and fortunately I was able to attend. It was a great event, organized by Politics & Prose Bookstore but held at the Lisner Auditorium on The George Washington University campus. The auditorium was packed, with somewhere around 1,500 fans in attendance.

Neil took the stage at 7 p.m. and kept everyone enthralled for the next hour-and-some; first discussing the genesis of the book, which contains more “feelings” than some of his other works. “I don’t do feelings very much, being both English and male,” joked Neil. He then read from Chapter 4 of the novel, in which the narrator and Lettie Hempstock meet a very scary Thing. It is quite creepy.

After the reading, Neil answered questions collected from the audience beforehand. Some he answered with humorous efficiency:

“What was it like to work on Doctor Who?”

“It was enormously fun.”

“Do you choose your audience (adults or children) before writing?”

“Once someone has written things, what is your advice for getting published?”

Others he devoted more time to. A question about where the idea of the Hempstock family (members of which have also made appearances in Stardust and The Graveyard Book) originated resulted in a story about when Neil was young and his mother told him that the farm nearby was in the Domesday Book, which meant it was about a thousand years old – “and it didn’t occur to me that it would have been a hovel at that time. I just assumed that the red brick farmhouse had always been there, and that the same family would have been living there for a thousand years as well.” Neil named that imagined family the Hempstocks, and in reference to their appearances in other books, said “it just made sense that some of them would have gone off into the world.”

After answering a plethora of questions, Neil closed with a short reading from a more humorous bit of Ocean, and then stated that he would sign for us “until my hand falls off.” And so he would have, I am sure, but thankfully, despite signing well into the night, I believe he still has both of his hands. Which is good, because it’s much easier to write with hands, and I want Neil to keep on writing more amazing stories like The Ocean at the End of the Lane for a long time to come.

If you haven’t read the novel yet, I highly recommend it. And until next time, Servo Lectio!