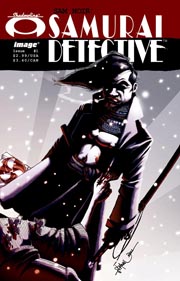 A book like this comes around and I am forced to wonder whether Image is making books especially for me. Sam Noir Samurai Detective is exactly what it sounds like a story about a hardboiled detective who kills ninja assassins with a katana.

The construction of the world is the most amazing part of Sam Noir. Eric A Anderson and Manny Trembley have a textbook noir cityscape narrowly separated from the rolling plains of classic samurai dramas. The first story in the collection goes seamlessly from fighting ninja in the snow to a small army of samurai clad in business suits on top of a skyscraper. The second story adds pirates and voodoo to the universe. If this isn’t going to sell you on this, I don’t know what will.

Volume One trade collects the original mini-series along with the Ronin Holiday mini-series. I think the original series is a lot stronger, focusing on more established noir and samurai conventions as opposed to the more outside the box second series. Not that I can’t find any of it enjoyable, but the story in the second one felt a little slapped together and devoid of any sort of real climactic battle. To introduce a character that can make zombies and then only make one of them is weak sauce, I was really excited to see Sam and Eddie tear through a ton of zombies but it was not to be.

Image has announced a third Sam Noir mini-series is coming and I await its arrival anxiously. They have a real hit on their hands, a universe capable of effortlessly encompassing a great deal of genre fiction.