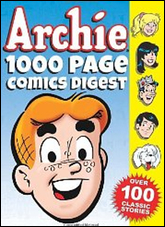 When I started my first term at DC Comics back in 1976, DC’s then-VP of production Jack Adler told me the story of the biggest comic book the company never published: Blockbuster. It was purported to be a mammoth reprint book, not unlike their 100-Page Spectaculars but maybe five times bigger.

But it was a set-up. Jack said there had been this young artist – now a major comics legend – who had been coming into DC’s bullpen towards the end of the day to work at space vacated by one of the production artists. When nobody else was around, he’d poke around the production product to see what was happening. He would then leak noteworthy events to the fan press… and this pissed DC off. So in order to confirm their suspicions they mocked up a gargantuan reprint book called “Blockbuster” and left stuff lying around when only said leaker was around to see it. He did, he ratted the company out, and DC confirmed his guilt. 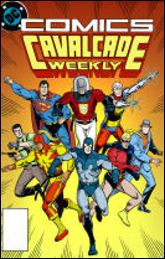 I won’t tell you who this artist was for two reasons. Number one, I was young once myself (I am now a 14 year old boy trapped in the pathetic body of a 62 year old who deserves it back). Number two, were I in that position at that time, I probably would have done the same. Actually, I might do that today as well, but I’d do it for ComicMix. The title name was later resurrected for a weekly title featuring revivals of the Charlton heroes, but they changed it to Comics Cavalcade Weekly and commissioned a lot of work before deciding not to do it after all.

You might ask what this has to do with Archie’s thyroid. A couple weeks ago Archie Comics came out with a digest comic with serious glandular issues entitled Archie 1000 Page Comics Digest. This book, of course, reminded me of Blockbuster – except it is real.

Don’t go expecting it on the checkout racks of your neighborhood supermarket. The book is an inch and three-quarters thick. In comic book terms, that’s about, oh, 1000 pages. It retails for $15.00, which is quite a bargain, and places like Amazon have it for a hair over ten bucks. It’s also available digitally in three parts for retail price which, given the cost of printing and shipping and returns, is comparatively a rip.

Unlike Archie Comics’ other recent, slimmer tomes, Archie 1000 Page Comics Digest is mostly limited to fairly recent stories. I enjoy the early stuff quite a lot, but Dark Horse and IDW have been covering those bases with several coats of paint. No cover repros, no intros, the only additions were creator credits. 1000 pages of pure story.

I’m reminded of a time when I was even younger and the saints were battling dinosaurs. My parents would buy me one or two of those Harvey 25-centers (thinking the Archie annuals were gender-inappropriate) or maybe one of those Dennis The Menace or Disney vacation specials, plop me in the back seat of the car next to my sister (who did get those gender-inappropriate Archie annuals, which I also read) and drive off to visit my grandmother in Indiana or maybe to a wooden vacation shack in western Michigan alongside the Burma-Shave signs. They were right: those big bargain books kept me quiet for most of the trip.

If I were in my parents’ position today, I’d buy my kid this Archie 1000 Page Comics Digest in a heartbeat. Evidently Archie thinks highly of the format: they’ve got sequels set for October and December.

More power to them. At this price, you just can’t go wrong.