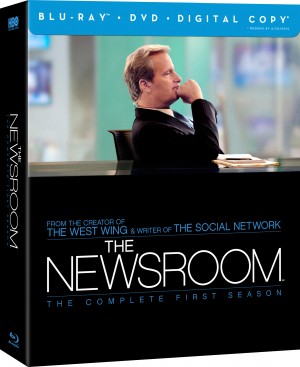 Even at his worst, Aaron Sorkin’s television work is at least trying to say something. He may have crashed with Studio 60 after soaring to heights unimagined with Sports Night and The West Wing, but his first series for premium cable, The Newsroom, hews closer to success than failure regardless of its unevenness.

The series debuted on HBO last summer to mixed reviews and is coming to home video in a handsome box set on Tuesday. Lacking the blood, nudity, and shock value of True Blood and Game of Thrones, it nonetheless makes for compelling watching because these are idealized journalists trying to honor the traditions of journalism they were raised on. The series is set in the recent past, allowing the viewers watch as these reporters cover already familiar events, which lets you invest a little more in the characters and not the story.

There’s little doubt that this is a biased newscast and an equally biased production out to skewer the Tea Party and the radical right as seen through the prism of the disillusioned news anchor Will McAvoy. He and the other reporters on News Night ask all the tough questions that viewers realize all too often do not get asked in the real world. Pundits and politicians all too often get away with making outrageous statements on the air because few challenge them and fewer fact-check the claims. Thanks to hindsight, Sorkin does just that, exposing the Republican party and others for the feckless, thoughtless hacks they are, forgetting entirely about American exceptionalism or the fact that they were elected to lead. 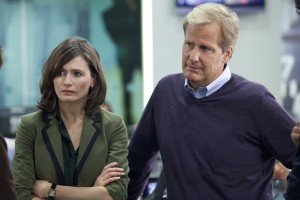 So yeah, I like the show. Will McAvoy’s opening monologue about why the USA is not the greatest power in the world is a brilliant info dump that clearly tells you in the pilot’s first ten minutes that there’s an agenda informing the series. But, like Sorkin’s other shows, it’s also a work place dramedy with rich characters and unrequited romance. Led by Jeff Daniels’ McAvoy, who has been floundering until the new executive producer is introduced, who just happens to be his former lover MacKenzie McHale (Emily Mortimer), who cheated on him and broke his heart. He still loves her and has been carrying an engagement ring ever since but can’t bring himself to forgive her. But there’s also Alison Pill and John Gallagher Jr. as staffers who are romantically linked yet drawn to others. Even socially awkward financial journalist Sloan (Olivia Munn) reveals herself to have a heart.

Their trials and triumphs are overshadowed by the ratings chase with corporate, represented by an imperious Jane Fonda, looking for profits. Defending McAvoy from the “suits” is Charlie (Sam Waterston), the old school journalist who brought McHale in to jumpstart thigns and sits back to enjoy the ride, glass of scotch always in his grip. 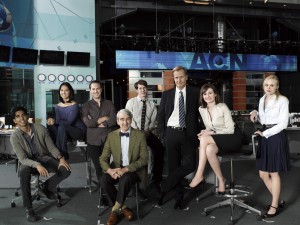 The ten episode box set comes complete with five Blu-ray discs chock full of episodes, commentaries, and special features. There’s an additional sleeve with double-sided DVD editions of the first season and there’s also an Ultraviolet option. They look and sound as one would expect and make for good viewing.

The five commentaries highlight Sorkin but also include various cast and crew. They’re worth a listen as you learn about how the production works and how the actors view their characters down to whether or not the necklaces worn by Mortimer work with her bust. The recaps and previews that accompanied the broadcast versions are included along with the brief Inside the Story segments. You also get treated to five deleted scenes from four different episodes which are said to have been cut for time, which is odd on premium cable, but it’s nice to have them here. You also get Mission Control (5:17) providing you with a look at the amazing newsroom set that just needed a console by console tour to explain what they do. Better is the roundtable conversation with Sorkin, Daniels, Mortimer, Waterston, director Greg Mottola, and executive producer Alan Poul where they reflect on the first season with some funny anecdotes.

Season two is coming in July so this is a good opportunity to introduce yourself to the show or refresh your memories so you know who is entangled with who when the cameras go live once more. For those who don’t like smart writing and smarter reflections on the state of American politics, there are other options.