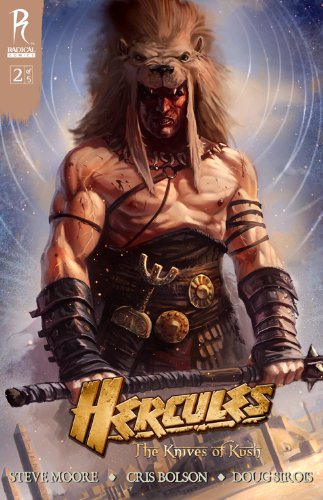 Founded in 2007, Radical Studios  is a multimedia company that incubated comic books for exploitation in other forms. Among their earliest releases was Hercules, boasting a Steranko cover, and it came with high production values and a bit of a buzz., The character returned for a second miniseries in and this interpretation captured Hollywood’s fancy. After years in development, production on the movie adaptation began today. Thew film enters a crowded summer 2014, especially for super-hero films, coming after Captain America: The Winter Solider and The Amazing Spider-Man 2 and just before X-Men: Days of Future Past and Guardians of the Galaxy (raising the question whether or not four Marvel Universe films in five months will reach the saturation point).

“HERCULES” will be distributed worldwide by Paramount Pictures on July 25, 2014 with select international territories as well as all television distribution being handled by MGM.

Based on the graphic novel Hercules: The Thracian Wars, the ensemble-action film is a revisionist take on the classic myth set in a grounded world where the supernatural does not exist. The screenplay is by Ryan Condal and Evan Spiliotopoulos.

Everyone knows the legend of Hercules and his twelve labors. Our story begins after the labors, and after the legend…

Haunted by a sin from his past, Hercules has become a mercenary.  Along with five faithful companions, he travels ancient Greece selling his services for gold and using his legendary reputation to intimidate enemies.  But when the benevolent ruler of Thrace and his daughter seek Hercules’ help to defeat a savage and terrifying warlord, Hercules finds that in order for good to triumph and justice to prevail… he must again become the hero he once was… he must embrace his own myth… he must be Hercules.