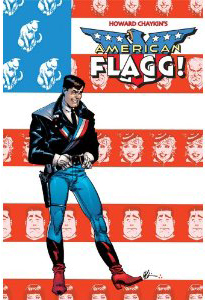 I don’t know about you guys, but I could use a laugh. One would think comics would be a great place to look for laughs, since, you know, they’re called “comics.”

But I don’t want to bitch and moan about stuff that’s not funny. I’d rather celebrate what is. Different people find different things amusing, but I suspect that at least one thing on this list will do it for you.

Here, for your entertainment pleasure and in no particular order, are some really funny books, done in the graphic novel format.

Kyle Baker is one of my favorite humans. There isn’t a book he’s done that doesn’t thrill me. The Cowboy Wally Show made me laugh so hard I couldn’t breathe. And if you want to know how he does it, you could do worse than track down How to Draw Stupid and Other Essentials of Cartooning, which is more hilarious than any educational book needs to be.

Another funny guy who works in the comic book business is Evan Dorkin. And luckily, Dark Horse has published a collection of his flagship series, Milk and Cheese.

Howard Chaykin is a known more for his elegant drawing style, his brilliant use of page design, and his sharp insight into the dark side of human society. I, however, love his sense of humor, which I first discovered in American Flagg. I mean, the man made up a character named Pete Zarustica. I’m in love.

Another comics genius known primarily for brilliant use of the medium and his expansive and cosmic intelligence is Alan Moore. He’s funny, too! One of his first series, D. R. and Quinch, is available in a collected edition. It’s like, totally amazing.

Am I stuck on English language humor? Maybe. It is the language I speak and the language in which I form thoughts. That said, I am no cultural imperialist. For example, the Japanese series, What’s Michael, is my idea of brilliant. There are more than a dozen collections, but this Dark Horse edition is a good place to start. Warning: It probably helps to live with a cat.

Believe it or not, there was a time when there was no Internet and people got their news from newspapers, and, when they wanted other points of view, from alternative weekly newspapers. These papers were great places to find brilliant comics, starting with Jules Feiffer in the Village Voice (also syndicated to “normal” newspapers). After a few decades, there were syndicates for these cartoonists, and, today, it’s possible to buy collections of two of my favorites. You don’t have to be queer to laugh at Dykes to Watch Out For, but you do have to be able to recognize that “political correctness” started out as a left-wing joke. If you followed my advice and bought The Complete Wendel you’re familiar with this meme. Ripped from the same pages, and long before The Simpsons, Matt Groening was giving us a guided tour of hell. The nuclear family and all its intermeshed relationships were never so radioactive.

The comics page in daily newspapers is still alive, if not always well. If you miss your laugh a day, you can catch up with excellent compilations. I’m always happy to read Get Fuzzy and would enjoy a whole bunch of them together. And one of the great, and most hilarious, strips of all time is now in one big book. It’s enough to make a person love alligators.

Some jokes are universal, and then there are inside jokes. They not only make us laugh but they also make us feel understood. For us comic fans, I recommend Fred Hembeck who was a regular feature in The Comics Buyers Guide. His work is really dense, and really funny. I also adore Keith Giffen, for his Justice League, his Legion of Substitute Heroes, especially when he’s working on Ambush Bug with Robert Loren Fleming.

I’m sure I’ve left out some brilliant work, but you could do worse than start here when the holiday cheer gets you down.