In response to Kelly Sue DeConnick… 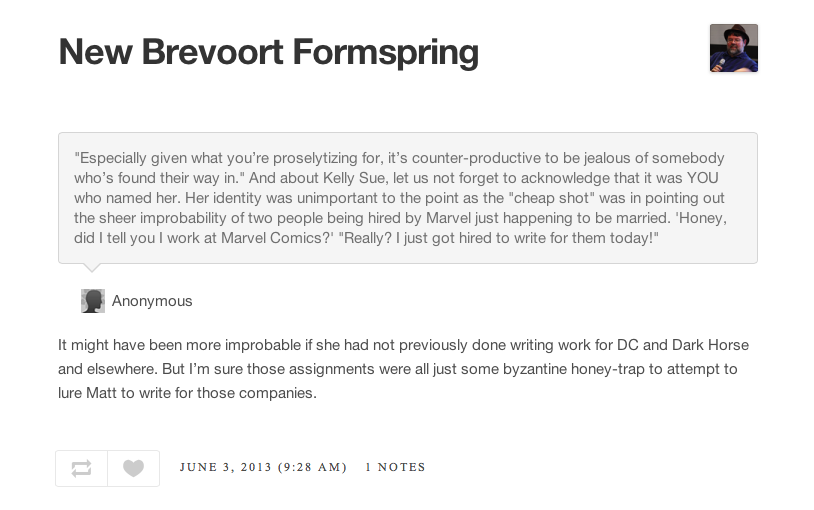 Kelly Sue DeConnick posted this on her Tumblr this morning. Reading the question I was saddened and angered but not surprised.

In industries that have a history of being a boys club, it’s not unusual to assume females are there either because of sleeping their way in or being the token female and therefore inferior to their male colleges. I am incredibly lucky to work in a technology company with a female CEO where being a woman is not looked down upon. I don’t have to worry about bout being thought of as a second class citizen because of my gender. Sadly, this is not true of all companies or all industries.

While I do not work in the comic book industry, I do spend a lot of time hanging out at my local comic shop House Of Secrets and I work programming magic for ComicMix on occasion. Both of these places were so welcoming to me when I took my first step into the world of comic books. I feel blessed to know all of the awesome people who work there.

Over the past year or so, as I dug myself out of a self-imposed hole of isolation, I started noticing a trend. I became aware that even though this is 2013, even though my mother and my grandmother fought this fight, it is still vitally important to stand up for myself and my gender. Somehow in 2013 I had to take stock of all the things I took for granted and take up the mantle of feminism. And I thought to myself ‘Really? This is 2013, right?’ We already fought for the right to vote, work and have a family or not when or if we felt it was right.

Yet here we are, still underrepresented in pay, out numbered in many professions (comics, technology, science, engineering, the list goes on) and less likely to be in the top jobs in whatever field we are in. It pains me that we have to resort to asking people to think of their daughters or their sisters to have the empathy to understand what is happening instead of just expecting them to treat human beings as human beings. Things like this seem to happen everyday, and I don’t know what to do to fix them. So I do what little I can.

First, if you are a woman in tech, comics, or any field just drop me a line. If nothing else, I can be your own personal cheerleader. Second off, to Kelly Sue, I’m sorry some asshole assumed you married your way in to Marvel. Your writing alone shows how terribly wrong he is. That said, I kinda want to be you when I grow up :). Your writing has proven to so many women that we can stand out and be awesome in whatever the hell it is we do and that should outshines any trolls.

I was helping out at House of Secrets the other day and a girl came in looking for Buffy season 9 vol. 1, which was sold out. I told her if she wanted an awesome female doing awesome things to check out your Captain Marvel TP. We discussed feminist comic books, and how amazing it is that they even exist. We agreed if women like us who are amazing at our jobs and proud of it don’t stand up, mentor other women, and keep the torch burning, everything our mothers and grandmothers and great grandmothers fought for can disappear in an instant it seems.

And now that I’ve had my ‘I am woman here me roar speech’ we now return your regularly scheduled posts of dinosaurs covered in glitter and the like.

By day, mild mannered programmer, experience engineer, sometimes designer of games. By night, duct taping ComicMix's servers back together and hacking together WordPress css. Also, I read lots of comics, make stuff and obsess over video games and what to cook for dinner.