New Who Review: “Nightmare in Silver” 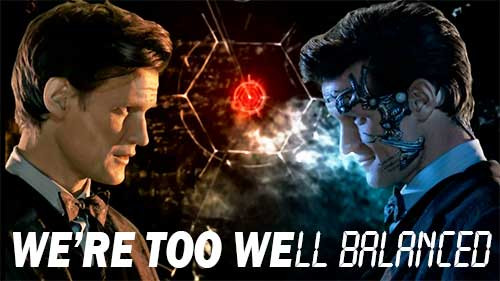 Not since Kiss Meets the Phantom of the Park has the an amusement park been made the center of a thriller so perfectly.  The return (and re-threatening) of a classic villain, a heck of a guest cast and a script by Neil Gaiman.  Seems like a dream, but mix it all together and it’s a…

NIGHTMARE IN SILVER
by Neil Gaiman
Directed by Stephen Woolfenden

After last week’s last-minute extortion, Clara’s charges Angie and Artie are granted a trip on the TARDIS to Hedgewick’s World, the greatest amusement park ever.  But hidden beneath it is a dangerous secret – A vast sleeping army of Cybermen, under repair and improvement for a thousand years…and they are ready to return.

Warwick Davis (Porridge) has a list of genre longer than … OK, it’s long.  Starting off with Wicket in Return of the Jedi and Willow Ufgood in the film of the same name, he’s been the star of an amazing list of sci-fi and horro films.  He’s been featured in the Harry Potter films, and was Marvin in the film adaptation of The Hitchhiker’s Guide to the Galaxy. Most recently he was the star of Ricky Gervais’ latest project Life’s Too Short, where he played an over the to version of himself.

Jason Watkins (Webley) is a very busy comedic actor in Britain with quite a resume in genre work. He played Herrick on the British version of Being Human and DI Gilks in Dirk Gently. He was featured in Psychoville, the latest production of Sheersmith and Pemberton from The League of Gentlemen, and just worked twice with the delightful Miranda hart on Call the Midwife and her own show Miranda.

Since Neil Gaiman (writer) last wrote a Doctor Who script (last year’s The Doctor’s Wife, he’s written four of five new books (including children’s books [[[Chu’s Day]]] and [[[Fortunately, the Milk]]]), his novel [[[Neverwhere]]] was adapted for BBC Radio, and he’s probably won a few more awards (including the Hugo for the aforementioned Doctor Who script). He’s in the middle of what he calls his last book signing tour, and is still quite happily married with the musician and internet-enrager Amanda Palmer.

THE MONSTER FILES – The Cybermen are certainly The Doctor’s greatest enemy after The Daleks.  Originally from the tenth planet in our solar system, Mondas, the planet left the sun’s orbit, and to survive, the denizens of the planet began to replace their body parts with mechanical replacements, eventually becoming more machine than humanoid.  They fought The Doctor though many eras, taking many forms as their systems adapted and improved.

In the parallel universe known as “Pete’s world”, the Cybermen were created on Earth, by over-reaching scientist John Lumic as an improvement to the human race.  Things went bad quickly, and soon the world faced a global war with the Cybermen, one they believed they won.  They eventually crossed over to our world a few times, presumably meeting and allying (alloying?) with their Mondasian counterparts, eventually forming the version we see in this episode.

This episode owes a debt to several past Cybermen adventures.  Neil Gaiman noted that he found the Troughton episode Tomb of the Cybermen to be the most scary of the cyber-adventures, and this story parallels it in many ways.  Both are set many years after the Cybermen were believed destroyed forever, and both feature a massive armory of Cybermen in suspension, awaiting awakening.

A chess-playing Cyberman was the center of one of Mark Platt’s Big Finish Audio adventures, The Silver Turk.  Both Platt and Gaiman’s reference the original (fake) chess-playing automaton, also known as The Turk, run by a chess master hidden within, as Porridge did here.  One of Platt’s plots was used as the base of the first new series adventure, Rise of the Cybermen / The Age of Steel.  Russell T. Davies made sure Platt was paid in full as if he’d written the TV script, and he received a “Thanks to” line in the credits.  The Turk was also the inspiration for the Clockwork Droids in The Girl in the Fireplace.

“Or don’t you have the processing power?” Even the last trick is a classic Sci-Fi move – give the computer an impossible problem to solve and it applies more and more power to solve it.  Spock told the ship’s computer to solve for Pi on Star Trek, and Arthur Dent almost killed everyone on the Heart of Gold when it asked the Nutrimatic machine if it knew why he wanted to drink dried leaves in a cup, boiled. As is true of all literature, it’s not what tools you choose to use, but how well you use them, and Neil uses them expertly.

UPGRADE COMPLETE – More than a few science-fiction fans have drawn parallels between the Cybermen and the Borg from Star Trek: The Next Generation.  The similarity was brought into te light in the recent Doctor Who / ST:TNG crossover in IDW comics, where the Borg and the Cybermen formed a brief alliance.  Here, we see the Cybermen take a bit more of a page from the Borg playbook, with the rapid adaptation and instantaneous assimilation of human beings.

TAKE MY ARMS, I’LL NEVER USE THEM… – Matt Smith’s portrayal of the battle in his head was dramatic and well-done, but the ever so slightly over the top portrayal of the Cyber-planner made me think of Steve Martin playing half of Lily Tomlin in All of Me.  And comic fans will note a parallel evolution in Dan Slott’s current run of Superior Spider-Man, with Peter Parker fighting for control of his mind and body, right down to trying to write messages on nearby pads.

JUST GIVE US ALL YOUR… – Gold has been a steadily growing threat to the Cybermen even since first mention of it as a weakness in the Tom Baker adventure Revenge of the Cybermen.  Originally it coated their respiration systems, causing asphyxiation.  As time passed, gold seemed to affect them as badly as silver did a werewolf.  Here, even in this advanced form, the weakness to gold survived, still in a physical fashion, allowing The Doctor to use it on the exposed circuitry to short out the Cyber-Planner’s control of his mind.

“The Biggest and best Amusement park there will ever be” – Considering the amusement parks that have been mentioned on the series, that’s saying quite a bit.  Disneyland Clom featured the Warpspeed Death Ride, as mentioned in The Girl Who Waited.  There’s been more than a few mentions of Disneyland in the series – a bunch of alien tourists were trying to go to Disneyland and ended up in Wales in Delta and the Bannermen.  The seventh Doctor and Ace visited The Greatest Show in the Galaxy.

“Let me show you my collection” – They raided the prop closet to fill the sets of Hedgewick’s world – there’s a slightly refitted version of the Doctor’s spacesuit from The Doctor, The Widow and the Wardrobe, a ventriloquist dummy from The God Complex, and various aliens from Rings of Akhaten.  There’s a few Sarah Jane Adventures and Torchwood alumni as well, including a Shansheeth, a Uvdoni, and a Blowfish.

“Do any of you play Chess?” – The Doctor certainly does.  He claims the Time Lords invented Chess; it’s not impossible as one of the traps in The Five Doctors resembled a giant chessboard.  He’s played regular games with K-9, and a high-stakes (and voltage) game against Gantok, an agent of The Silence in The Wedding of River Song.

“You are beautiful” – The Doctor has made a bit of a habit of complimenting particularly well-built enemies.  He similarly admired the Clockwork Droids in Girl in the Fireplace, and the werewolves in Tooth and Claw.

“See You Next Wednesday” – Fans of John Landis perked up at that line – it’s a running gag from his films.  Originally a line from the video call in 2001: A Space Odyssey, it’s been a movie poster, a film shown in Feelaround, dialogue in a horror movie, and more than a few other things in his various films.

“The Cyberiad” – As well as having a lovely Roman sound, mimicking several other terms the Cybermen use like Legion, it’s also a deliberate tip of the hat to the classic Stanislaw Lem novel.

“You’re deleting yourself from history.  You realize you can be reconstructed from the holes you left?” – Somewhat verifying the theme that’s been coming up most of the season, following up from The Doctor’s desire to “step back into the shadows”.  But it’s important to note that the first place that was done was in the Dalek database, and it was done by…Oswin Oswald.

“I feel like a monster sometimes” – Warwick Davis delivers a solid performance in this episode, referring to the actions of The Emperor in the third person, and really getting across the heaviness of the crown.  And once again we get a reference to the term “Monster”, that we’ve heard in several episodes. And once again, his actions could easily parallel the way The Doctor feels about himself.

“She’s not our mother” – I can’t help but notice somewhat of a similarity between Angie and young Mels, as played by Maya Glace-Green in Let’s Kill Hitler.  The sass, the overuse of the word “stupid”, but yet the interest in seeing the TARDIS.  And when Clara describes her as being “full of surprises” one has to wonder if there’s not one more coming…

“You’re the boss” – And in this episode…she is.  She’s given charge of the Imperial platoon, and does a VERY good job of taking charge.

“You’re the impossible girl” – While it’s not the first time she learned about The Doctor’s fascination with her, it’s the first one she remembers, presuming she indeed doesn’t recall the events of Journey to the Centre of the TARDIS.  And with the finale only days away, we clearly haven’t got long to wait to learn more.

NEXT TIME ON DOCTOR WHO – The Question is asked.  Who will hear the answer? The Name of the Doctor, this weekend.