Martha Thomases: The Needles And The Damage Done 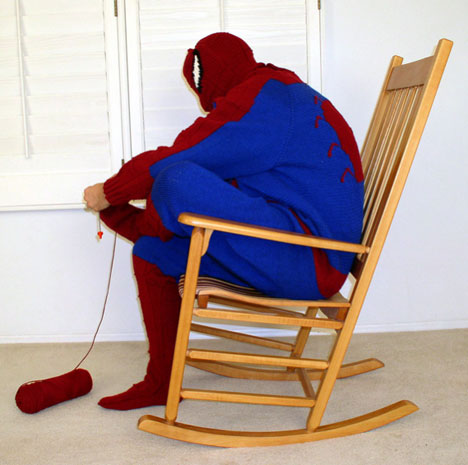 Twice a week, I teach knitting to people with cancer and caregivers.  Most of you probably think of knitting as something serene, a hobby for little old ladies (current and future).  However, when I teach, my instructions are filled with images of guns and shooting, stabbing people with knitting needles, and  when I make a mistake, I threaten my materials with unspeakably filthy and unnatural acts.

I do this when I teach for a couple of reasons.  Most important, it makes the techniques easier to remember.  However, for this group in particular, it gives a sense of control.  These people have so little control in their lives that it’s great to have control over knitting needles and yarn.

It’s powerful.  When you’re staring the possibility of dying in the face, it’s good to have something that makes you feel powerful.

This is a long, roundabout way of getting to the intersection of a couple of trends I see in our beloved graphic story medium.  As I wrote last week, the industry has a sad tendency to throw away creative talent when it is deemed to be “old.”  There is also a pathetic paucity of work by women, racial minorities, and people whose identify as queer.

Things are slightly better outside of the Big Two (Marvel and DC). but not much.  Not really.

This is a problem.  It’s a problem in many media (especially broadcast news, but that’s another rant) but it seems to me that comics is one of the worst.  It seems like a paradox, but by appealing to a cultural ideal of straight, white young men, comics may be stuck in a closet of marginalization.

We all have impulses and emotions.  Many of these are not welcome by the larger society in which we not only live, but rely on for daily support.  I think it’s healthy and mature to work out inappropriate feelings with the vicarious experience of entertainment.

Specifically, when we feel angry at our lives and helpless within are mortal bodies, we need power fantasies.  Hence, in other mass media, we get not just superhero stories. but police procedurals, sword and sorcery, House and Buffy the Vampire Slayer.

There’s other emotions that are inappropriate to express in our daily, public lives.  We don’t show grief or sadness or lust.  Men don’t show nurturing.  These feelings are for private time, or for working out with art.

There are books and movies for these feelings.  Dreary foreign films about death, silly romantic comedies with Katherine Heigl or Kate Hudson.  This movie, which is one of the most bleak, self-loathing things I’ve ever seen.  Sometimes, I need Carey Mulligan to hate herself so I don’t have to hate myself.

There are some brilliant graphic novels that appeal to these audiences, but they are few and far between.

There is nothing wrong with having a target audience.  That’s effective marketing (note:  marketing is not the same as editing, or publishing).  However, if one plans to have an entertainment conglomerate and see some growth, one needs to occasionally try for other audience segments, or at least other audience moods.

In the meantime, if you see any bald-headed women making socks, watch your ass.