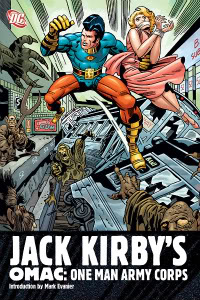 In the four volumes of Jack Kirby’s Fourth World

omnibuses DC recently released, there’s a not-so-coincidental trend of the introductions being more thought-provoking than the comics themselves.

During this latest run of Kirby nostalgia, most recently marked by this week’s release of his OMAC

omnibus ($24.99), some of the smartest folks in comics have jumped at the chance to write at length about the King’s deep philosophical messages and revolutionary narrative approaches.

Thank God there’s none of that on hand in the OMAC collection (Mark Evanier’s introduction is more behind-the-scenes insight than anything). OMAC was a simple enough creation, a mutation of Kirby’s unrealized story of Captain America in the future.

Buddy Blank is an average Joe in The Future who has the fortune of being randomly picked by a super satellite to be zapped and turned into a heroic brute with a mohawk. Why the mohawk? We may never know.

OMAC never really trucks in the existentialism or social mirroring of Fourth World, which too often became jumbled and rambling when it strived for deep and contemplative. OMAC was, as Evanier writes, a creation born of the necessity of Kirby’s contract, which demanded a whopping 15 pages a week! (And you wondered why some of his stories feel rushed.)

The emphasis from the get-go is on action. OMAC’s first line of dialogue ends, "I’m OMAC! Evacuate this section! I’m going to destroy it!" In case that was too subtle, the speech balloon is spiked like a yucca plant.

Instead of preachy monologues on the nature of good and evil from Darkseid and Highfather, OMAC features entirely motiveless villains that are bad just ’cause they are. "I think of all that money can buy! That’s why I build and sell female bombs!" declares one bad guy shortly before his comeuppance.

Another cape-wearing ne’er do well is named Mr. Big. He tries to destroy the OMAC project because… Well, he’s evil, OK?

Quite thankfully, comics have evolved quite a bit from that childish black-and-white storytelling, but that’s not to say OMAC isn’t enjoyable. If anything, it’s preferable to the Fourth World stories — a grand experiment that failed. This is outright action comics, exciting and intense and silly and all rendered with Kirby’s typical creativity and detail.

In one issue, OMAC (whose character appropriately is never developed at all) faces off against a group called the Crime Cabal that are kidnapping 20-somethings and replacing their brains with the brains of old people, who for obvious reasons want to be young again.

This could be taken as Kirby’s commentary on the pains of growing old, or the fear of mortality, or the looming future of a society overwhelmed with senior Baby Boomers.

But, let’s face it. That’s not what it is. It’s a goofy little comics story, a neat excuse to have OMAC punch some goons and save the day. And all those who worship at the idol of Kirby need to realize there’s nothing wrong with that.