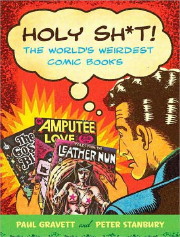 This is the kind of book I’m actually surprised to still see – I thought “look at this weird stuff” books had been entirely superseded by the greater speed and flexibility of the Internet. (I can think of three similar sites just off the top of my head – Superdickery, James Lilek’s Funny Books, and Scott Shaw!’s Oddball Comics – and without even diving into the blog world.) But I suppose as long as there are cash registers in this world, there will be eye-catching little impulse-buy books to sit next to them and lure in the curious, unwary, or amused. [[[Holy Sh*t!]]] is a small-format hardcover, roughly six inches square, and I wouldn’t be at all surprised if there was a corresponding point-of-purchase cardboard display that holds six to eight of them.

The title gives away the whole point of Holy Sh*t! – it’s a collection of amusingly weird, or weirdly amusing, covers from the last sixty years or so of comics, supposedly covering the whole world but actually staying, for the most part, very close to the mainstream of American corporate comics (with regular excursions into the well-known underground movement). I should mention, to save confusion, that the UK edition has the somewhat more boring title [[[The Leather Nun and Other Incredibly Strange Comics]]].

Gravett and Stanbury have collected sixty comics, from the forties through 2004, from obvious choices like [[[Hansi]]], [[[The Girl Who Loved the Swastika]]] and [[[Mr. A.]]] to lesser-known stuff like [[[The Gospel Blimp]]] and [[[Super Shamou]]], and given each of them a two-page spread. Each book gets a cover, shown full-bleed on the right-hand page, usually one panel, some bibliographic information, and a rather bland description by the authors. Gravett and Stanbury are knowledgeable about comics, but they don’t seem to have much of a point of view – they’re not making fun of these books (rightfully or unjustly), or having gleeful fun with them, or much of anything. Their descriptions read a bit like a slightly depressed Comic Shop Guy describing the worst-sellers in his stock, only less entertaining than that.

The format also doesn’t give Gravett and Stanbury room to go into depth where it might be warranted – for example, they showcase [[[Popeye and Personal Service Careers]]] without mentioning the whole rich panoply of Popeye vocational-training comics. (My high school had a large display box of them, covering possibly every reasonable career for a ‘70s kid. And the mere fact that they were all presented by Popeye should be the subject of some sort of comment.) Some of the books they feature are immediately familiar to every half-serious comics reader (like [[[Brother Power]]], [[[the Geek]]]) and some are amazingly obscure oddball things (like Sh-t! Comics). But it all gets smoothed out to the same level with their even, bland tone.

Holy Sh*t! is not nearly as much fun as it should have been. It’s a decent collection of weird comics, presented well and truthfully, but Gravett and Stanbury just don’t seem to be enjoying themselves here, and there’s no real reason to get a book like this unless it makes you laugh. And I’m afraid Holy Sh*t! didn’t make me laugh once. So I think I’ll just go back to What Were They Thinking?!, which has the additional advantage of being free.