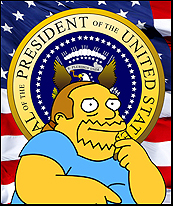 There’s a new sun rising up angry in the sky

But nothing can change the shape of things to come

Actually, I’m rather proud of that last bit. Cultural elitism really pisses me off. But this is America, where the bottom line justifies everything. The day nerds became bankable was the day we became legitimate.

We helped. Picking up a lesson from my fellow hippie freaks of 1967, we have redefined the term “nerd” simply by accepting it as a reference to ourselves. My fellow ComicMix columnist Emily S. Whitten embraces this wonderfully, in nearly everything she writes for this site.

The Simpsons helped quite a bit. Comic Book Guy exposed a previously hidden reality: a goodly percentage of those who hang our at the comic book shop are members of Mensa, and more would be if we had even the most rudimentary social skills. Mind you, I’d only been to a handful of Mensa meetings and I found them pathetically tedious, but they were at the University of Chicago so I was probably asking to be bored.

The fact is, comic book reading among those older than nine used to be associated with stupidity, arrested development, and the complete lack of a social life. Now many understand that it’s the upper end of the brain rack that finds this stuff appealing.

Nerds might not be cool, but then again, why is it that nerds invent all the cool stuff? We might have very short attention spans and we’re easily attracted to that which is bright and shiny, but we’ve taken over the popular culture and we’ve taken over technological innovation and, quite literally, our toys have become the tools of revolution all across the world.

Remember Doctor Doom’s little flying teevee cameras that would allow him to view his mayhem all over the world? He borrowed them from Ming the Merciless… but that’s not my point. Today, for good or for bad or for both, we’ve got our flying cameras. They’re called drones. Some of them are capable of bombing people back to the Flintstones. We’ve got GPS in our pockets, transponders in our cars, cameras at most of the traffic lights and highways and stores and office buildings and not only do “we” know where you are, but we know where you have been.

Hey, I didn’t say nerddom was a force for good. It’s a human force. And it’s mainstream.

And we’ve got these massively overpopulated conventions all over the world. We can organize.

We can take over.

Maybe… we already have.