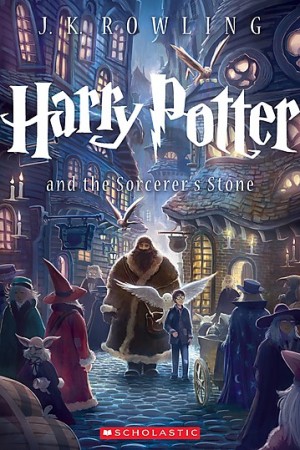 Hard to believe that it’s been 15 years since J.K. Rowling’s boy wizard first came to America. To celebrate, Scholastic announced this morning that a new covers will grace anniversary editions of the seven-book mega-best-selling series. In an interesting move, Kazu Kibuishi, the creator behind the over-hyped Amulet series, will be providing the new covers, replacing Mary GrandPré’s now classic images. Here’s the first cover for your viewing and personally, I think it’s an improvement. It’d be nice, as part of the celebration, they used the original title, Harry Potter and the Philosopher’s Stone, but that’s not going to happen.

Here’s the formal release with all the anniversary details.

New York, NY (February 13, 2013) – Harry Potter fans and young readers just starting their journey through the world of Harry Potter will have something new and exciting to add to their bookshelves this September.  Scholastic (NASDAQ: SCHL), the global children’s publishing, education and media company, today unveiled an all new cover for Harry Potter and the Sorcerer’s Stone – the first of seven new covers to appear on U.S. trade paperback editions coming in September 2013 to celebrate the 15th anniversary of the U.S. publication of Harry Potter and the Sorcerer’s Stone, the original book in J.K. Rowling’s best-selling Harry Potter series.

The stunning art for the new editions is by critically acclaimed artist Kazu Kibuishi, best known for his #1 New York Times bestselling graphic novel series, Amulet.  Kibuishi is a longtime Harry Potter fan who called this opportunity, “more than a little surreal.”  Each of the seven new covers will depict a distinctive and memorable moment from the respective book.  The collection, which will also be released in September as a boxed set, will offer new readers just reaching the age to begin the series a glimpse of J.K. Rowling’s magical world and the epic story they are about to enter.

“The Harry Potter covers by Mary GrandPré are so fantastic and iconic,” said Kibuishi.  “When I was asked to submit samples, I initially hesitated because I didn’t want to see them reinterpreted!  However, I felt that if I were to handle the project, I could bring something to it that many other designers and illustrators probably couldn’t, and that was that I was also a writer of my own series of middle grade fiction. As an author myself, I tried to answer the question, ‘If I were the author of the books – and they were like my own children – how would I want them to be seen years from now?’ When illustrating the covers, I tried to think of classic perennial paperback editions of famous novels and how those illustrations tend to feel.  In a way, the project became a tribute to both Harry Potter and the literary classics.”

The inspired original art for the series, created by the talented Mary GrandPré will continue to be featured on the U.S. hardcover and digest paperback editions.

According to Ellie Berger, President, Scholastic Trade Publishing, “The brilliant artist Kazu Kibuishi offers his unique vision of the world of Harry Potter, making each cover an incredible adventure that will transport new readers just discovering Harry Potter for the first time directly into the rich world of J.K. Rowling’s imagination.”

Scholastic also announced that in November 2013, the company will release the first boxed set of the complete Hogwarts Library in the U.S., including Quidditch Through the Ages, Fantastic Beasts and Where to Find Them, and The Tales of Beedle the Bard.  Sales of the Hogwarts Library will support two charities selected by the author, J.K. Rowling:  Lumos, a charity founded by J.K. Rowling which works to end the institutionalization of children, and Comic Relief, a UK-based charity that strives to create a just world free from poverty.

Fifteen years after the first U.S. publication of J.K. Rowling’s first book, Harry Potter and the Sorcerer’s Stone in September 1998, there are more than 150 million Harry Potter books in print in the United States alone and the series still hits bestseller lists regularly. The seven Harry Potter books are published in over 200 territories in 73 languages and have sold more than 450 million copies worldwide.