A GIRL AND HER CAT! 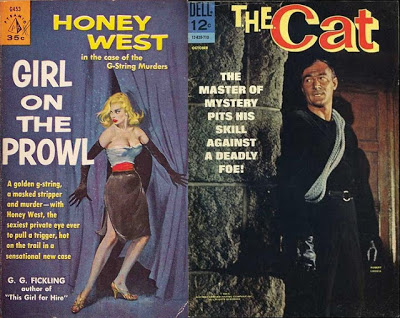 New Pulp Author Win Scott Eckert announced on his blog that he is writing a new novel for Moonstone Books, Honey West and T.H.E Cat: A GIRL AND HER CAT!

It’s Honey West and T.H.E Cat, in the first new Honey West novel in over 40 years, A Girl and Her Cat!

When an exotic green-eyed Asian doctor hires Honey to recover a stolen sample of a new influenza vaccine from a rival scientist, the blonde bombshell private eye—suspicious but bored—takes the case. But after she’s attacked not once, but twice, on her way from Long Beach to San Francisco to track down her quarry, she knows there’s more—much more—to her femme fatale client than meets the eye.

Along the way, Honey’s one-time paramour Johnny Doom—ex-bounty hunter and current Company agent—reenters the picture, and the gorgeous doctor’s insidious—and deadly—grandfather deals himself in. But when Honey questions whether Johnny’s playing her game, or just playing her for a patsy, she joins forces—as only Honey can—with the one man in Frisco who can help her recover the stolen vaccine-cum-bioweapon and prevent a worldwide epidemic—former cat burglar-turned-bodyguard Thomas Hewitt Edward Cat: T.H.E Cat!

Join writers Win Scott Eckert and Matthew Baugh, and cover artist Douglas Klauba, for A Girl and Her Cat, a groovy, racy 1960s romp coming in 2013 from Moonstone!