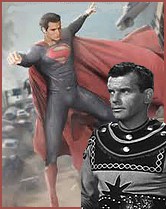 Last week my colleague Ms. Thomases and I were sharing a movie experience at a Manhattan multi-mega-complex. Running the gauntlet of promotional material we passed the familiar poster advertising the franchise-saving event, Man of Steel. Once we were settled in the theater and the obnoxiously repulsive commercials started playing – most were for television shows – I mentioned to Martha that the new management of Warner Bros. hasn’t truly green-lit the Justice League movie. “They’re waiting to see how Man of Steel works out.”

Her Oh-Oh Sense flared up. While both of us were hoping for a killer Superman flick, nothing we have seen thus far has promoted any sense of confidence. Do we need another origin story filled with the Els and the Kents? Most of us have cable teevee or DVDs or streaming video or all three, and there’s plenty of filmed presentations of that origin story. My favorite remains the one from the 1950s teevee series where Our Miss Brooks’ Phillip Boynton played Jor-El while wearing Buster Crabbe’s tunic from the Flash Gordon serials… but that’s just me and a few other decrepit baby-boomers. The rest of you probably never heard of Professor Boynton, and some of you haven’t seen the Flash Gordon serials. You should fix that.

I’m certainly willing to give it a shot and I’ll enter the theater with all the optimism I can muster. It has a good cast, and Michael Shannon certainly has the gravitas to be a great General Zod. But there’s one problem that I’m unlikely to get past.

OK. I’m sure somebody in Hollywood said “That guy wears his underpants outside his leotard! It’s stupid! We’ve must fix that!” Actually, it’s an old joke. But Superman is a genuine American icon, right up there with the flag, apple pie and third-world health care. Whereas we can fix the latter (but won’t in my lifetime) and the second is fattening, you do not change the flag. You do not change the Coca-Cola bottle, even if they’re reduced to printing a silhouette of it on their cans. You do not give Donald Duck Prozac, you do not copy Johnny Carson’s golf swing on your teevee show.

I’m not suggesting things cannot change. But there’s a reason why certain things reach iconic status. It’s like granting historical status to New York’s Grand Central Terminal (100 years old last week) or Chicago’s Rookery (Daniel Burnham rocks!). Society has deemed Superman’s trunks appropriate, dating back to the time Joe Shuster employed the imagery of the 1930s circus strongman for the Man of Steel’s costume. We may not have very many circus sideshows these days, but we do have Superman.

Besides, if there’s one stupid element in the big guy’s costume, it’s that cape. One of Clark Kent’s undisclosed superpowers must be a psionic ability to keep that thing from flapping over his face while in flight, or doing an Isadora Duncan on Lois Lane when they fly out to the Fortress of Solitude for a weekend of melting the crystals.

But I would not drop that cape, just like I wouldn’t gawk at our flag and ask “gee, do we need all that red?”

Because Warner Bros. is the dog and its DC Entertainment is the tail, Supe’s trunkless costume debuted in the ever-changing yet never-evolving New 52. I get this: a lot more money is riding on the movie franchise than on the comic books. However, there’s a reason why Superman has lasted 75 years – Man of Steel comes out pretty damn close to the actual 75th anniversary date – while other characters from that era that were more popular at the time (The Shadow, The Lone Ranger, Buck Rogers) have fallen out of favor. And that reason is wrapped in a red cape and red trunks.

When I see Man of Steel, I’ll have a hard time looking at the Big Guy and not thinking “Jeez, these morons got it wrong!”