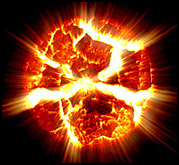 From the totally unauthorized history of the late, great planet Krypton.

Fer-El waited until the building stopped shaking, stepped around a slab of plaster that had fallen from the ceiling, and entered the senator’s office. He crossed to the desk and, without waiting for an invitation, slouched into a chair.

Senator Ban-El brushed plaster dust from his shoulder and asked, “Did you feel it?”

“Didn’t feel a thing,” Fer-El answered. “Building didn’t shake, not a bit, and even if it did, that’s happened before. Plenty of times. But enough of that. I bring good news. I just topped off our coffers. Put another four billion in your campaign fund. No problem with the election now.”

The windows rattled and a picture fell from the wall.

“Did you feel that?” the senator asked.

“Nope. Feel what? Say, you haven’t been listening to that Jor-El buzzard, have you?”

“He spoke to the combined chambers this morning. Said there’s still time. We can fabricate a substitute for –”

“And you bothered to stay awake? Banny, I’m gonna tell you once more plenty of what you already know. That Jor-El…not just him, all those so-called scientists with their ‘facts’ and ‘data’ – all wishy washy sissies. Not a real Kryptonian man in the lot! What is it they say again?”

“We’ve exhausted the planet’s supply of dragonbreath and without it there’s nothing anchoring us to the space-time continuum.”

“All lies. There’s plenty more dragonbreath where that came from.”

“All the dragons died out five million years ago.”

“Piddykrunch! I believe I saw a dragon on my way down here. And anyway, our beloved Krypton’s only about four hundred years old. That’s in The Scrolls and you know what else’s in The Scrolls? Nothing bad’s ever gonna happen long as we obey the Rules handed down by our beloved senators –”

“I’m a senator,” the senator protested.

“See? My point exactly. Proves that nothing bad can happen or you couldn’t do it. See how simple it is? And anyway, it’s all happened before and nothing bad came of it then.”

“My mother was one of the forty million.”

“See! Your mother was and Jor-El’s mother wasn’t. That’s in The Scrolls , too, if you know how to look for it. I’m a little disappointed. I shouldn’t have to tell you this stuff. Maybe I can find another home for my four billion.”

Senator Ban-El half rose from his chair and said, “No no no. I didn’t mean anything.”

The senator sank down and sat on the floor. His chair had vanished. Then the floor suddenly wasn’t there and as the senator fell, he heard Fer-El screaming, “It’s happened before.”

RECOMMENDED VIEWING/LISTENING: Masterpieces of the Imaginative Mind, presented by The Teaching Company and taught by Professor Eric S. Rabkin. Note: These Teaching Company courses are generally offered in two formats, audio and video.