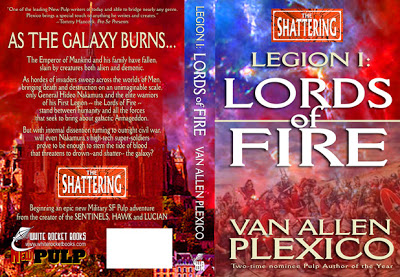 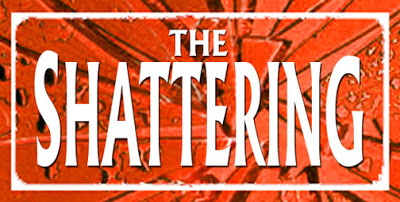 THE SHATTERING: LORDS OF FIRE Arrives in Trade Paperback!

Stripped of his authority by the Emperor of Mankind and assigned to duty in deepest space for failing to prevent the greatest robbery in history, former Colonel Ezekial Tamerlane believes his career as a soldier is over.  But strange forces are at work, urging the Emperor to set out on a journey fraught with dangers into a nightmare realm a universe away from our own; and Tamerlane, like it or not, is going along for the ride.  What he and his high-tech super-soldiers find along the way will shake the Empire to its very foundations, and unleash a crisis of galactic proportions that not all the armies in creation can hold back…

“Plexico is the master of space opera.” –Pulp Fiction Reviews

LORDS OF FIRE begins a new galaxy-shattering adventure from the author of HAWK: HAND OF THE MACHINE and LUCIAN: DARK GOD’S HOMECOMING, and bridges the divide between those two novels and universes.  Here we see the fallout from the war of the gods in LUCIAN, and the growing crisis that will lead to the creation of Hawk and the other Hands of the Machine.  Futuristic armies clash, godlike beings manipulate empires, and the gateway to the Underverse of the Below is reopened, unleashing slavering demonic hordes upon an unsuspecting galaxy!

“I wanted this book to kick off the new “Shattering” saga with a bang—with action from start to finish,” says Plexico of LORDS OF FIRE, “and that’s exactly what it does.  I have no doubt that my loyal cadre of longtime readers will enjoy it, and I’m confident it will appeal to a new readership of bold Military SF enthusiasts who like a mash-up of high-tech combat and supernatural menaces in the vein of the Warhammer 40,000 books.”

White Rocket Books is a leader in the New Pulp movement, publishing exciting action and adventure novels and anthologies since 2005, in both traditional and electronic formats.   White Rocket books have hit the Amazon.com Top 15-by-Genre and reached #1 on the New Pulp Best-Sellers List, and have garnered praise from everyone from Marvel Comics Vice-President Tom Brevoort to Kirkus Reviews.

Now available in paperback at Amazon. 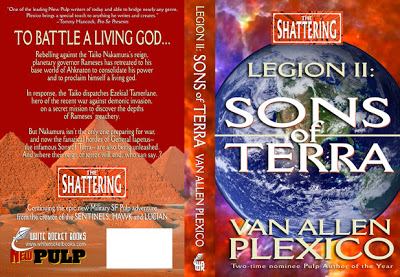