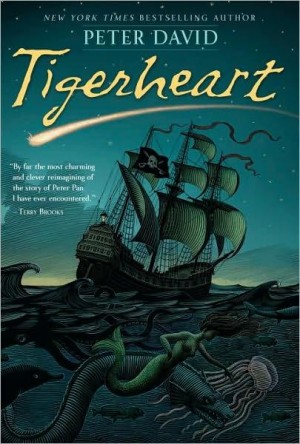 As you know, Peter is facing some horrific medical bills in the coming months and everyone is doing their part to help out. This now includes his publisher, Random House, which has temporarily reduced the eBook price of his fabulous fantasy, Tigerheart, to a mere $2.99.

The pastiche of J.M. Barrie’s Peter Pan was originally released in 2008 and remains one of his proudest achievements.

For those unfamiliar with it, here’s the official description:

For all readers who have ever lent an enthusiastic ear to a wonderfully well told tale, or tumbled gladly into pages that could transport them anywhere, now comes novelist Peter David’s enchanting new work of fantasy.

Action-packed and suspenseful, heart-tugging and wise, it weaves a spell both hauntingly familiar and utterly irresistible for those who have ever surrendered themselves to flights of fancy, and have whispered in their hearts, “I believe.”

Paul Dear is a good and clever boy, doted on by a father who fills his son’s head with tall tales, thrilling legends, and talk of fairy-folk, and by a mother who indulges these fantastic stories and tempers them with common sense. But Paul is special in ways that even his adoring parents could never have imagined. For by day, in London’s Kensington Gardens, he walks and talks with the pixies and sprites and other magical creatures that dwell among the living-but are unseen by most. And at night in his room, a boy much like himself, yet not, beckons to Paul from the mirror to come adventuring. It’s a happy life for Paul, made all the more so by the birth of his baby sister.

You can find it for this low, low price at Amazon’s Kindle or Barnes & Noble’s Nook and it comes highly recommended by those who have read it.

A big thank you to Nook’s Ali T. Kokmen for helping make this a reality.