Mike Gold: Too Much Is More Than Enough 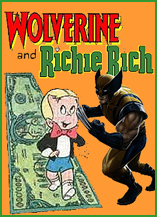 Back in the 1960s and 1970s there was this publisher called Harvey Comics. They were in business to sell comic books to children: Casper the Friendly Ghost, Wendy the Good Little Witch, Hot Stuff, Sad Sack, Little Dot, Richie Rich… well, mostly Richie Rich. As in “I counted 47 different Richie Rich titles from Harvey Comics, not including the daily and Sunday newspaper strip.” Most were bi-monthlies and quarterlies, so to be fair I doubt Harvey released more than a four or five Richie Rich titles every week.

The modern-day equivalent to Richie Rich is Wolverine, who appears in dozens of Marvel titles each month. The sundry Avengers titles, the sundry X-Men titles, Wolverine, Savage Wolverine, Wolverine Max, Wolverine’s Bank Vaults, Wolverine Dollars and Cents… When it comes to that mad little bugger, well, no unemployment lines for him.

Batman is almost as heavily exposed: his various titles, his “family” titles including Batgirl, Batwoman, Nightwing, Robin, blah blah blah. He’s got Batmen stashed all over the world; perhaps the universe. Multiverse. Whatever.

Spider-Man, Iron Man, certainly Captain America… there’s no shortage of work for these guys, either. So why am I bitching? What, am I opposed to the free market?

Aside from the fact that the “free market” is a bigger fantasy than the multiverse, I do not begrudge a publisher its opportunity for success. However, there is the element of uniqueness that makes comics fun. That element is lost, rather rapidly, with overexposure. There are something in the neighborhood of 7200 members of the Green Lantern corps, and if I’m not mistaken all but the Moslem dude has his own comic book. Sarah Palin just found a power ring in her Rice Krispies.

When was the last time there was a truly original, a truly unique, successful superhero launch? Spawn and Savage Dragon? That was 20 years ago. DC Comics rebooted its universe 14 times since then. Before that? What, maybe Judge Dredd (depending upon your definition of “superhero”)? That was back in 1977, when Jimmy Carter was sworn in as President.

Have we lost our originality? No, we simply don’t have publishers with either the backbone or the resources to pull it off. So instead we clone ourselves. The major superheroes are little more than a fourth generation photocopy of what made them unique.

If the marketplace supports mega-multiple titles for its half-dozen most popular characters, why shouldn’t publishers meet that demand?

Because, today, Richie Rich is not being published at all.