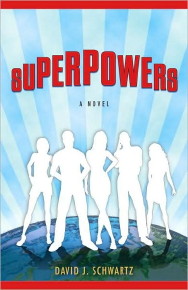 There are two kinds of superhero novels, with very different rules. The more common – but less respected – kind of superhero novel takes characters and situations we already know from an existing comics universe and tells a story using that furniture. Those books can be amazing, like Elliott S. Maggin’s two Superman novels, Last Son of Krypton

, or they can be mediocre, like…fill in your own example here. But they all hit the ground running, since they work from our knowledge of those universes. Who would read a Spider-Man novel if he’d never heard of [[[Spider-Man]]]?

The other kind of superhero novel tends to come from people outside the comics field, and usually reinvents the wheel in its vision of superheroics. (Like everything else, sometimes doing it elegantly and sometimes producing an oval object that doesn’t even work as a wheel.) Some of the better examples of that type of superhero novel are Michael Bishop’s Count Geiger’s Blues

and the recent Soon I Will Be Invincible

by Austin Grossman. Those books often have aggressively obvious titles – [[[Superfolks]]], [[[Hero]]], that kind of thing – to immediately signal to the audience that they’re novels about superheroes.

[[[Superpowers]]] is one of the latter kind of novels, down to the title. The British cover (see the continuation) even has line drawings of the characters in costume (by Norm Breyfogle, a name we who read comics will nod knowingly at), much in the style of last year’s [[[Soon I Will Be Invincible]]]. And the set-up is quite typical of an outsider superhero novel: five undergraduates at the University of Wisconsin (Madison) develop individual superpowers after an evening of drinking homemade beer. (One of the endearing things about Superpowers is that Schwartz doesn’t even try to explain their origin – something unexpected happened, and they now have powers. Period.) 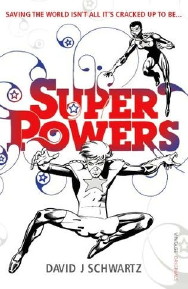 Schwartz devotes roughly equal time to his five main characters:
•    Harriet, daughter of a local police detective and editor for the school newspaper – she can turn invisible
•    Caroline, whose mother ran away when she was very young – she can fly
•    Mary Beth, driven pre-med student – she’s a superstrong brick
•    Charlie, who has no single character hook I can recall – he reads minds, not always voluntarily
•    Jack, whose father is dying on their family farm about an hour away – he’s a speedster

They all conveniently live in the same building: the two boys are roommates upstairs with a third man, Scott (who mostly lives with his girlfriend and doesn’t really affect the book until very late), and the three girls are downstairs. And, after a little bit of fumbling about, they decide to form a super-team – with spandex costumes and everything – that eventually gets dubbed the All-Stars by the media.

Superpowers is awfully old-fashioned and earth-bound for a superhero novel: there are indications that these five are not the first superheroes ever, but no other powered individuals ever become important to the plot. There are no supervillains, or a major villain of any kind. And the overarching plot basically boils down to “Gosh, it’s tough to do the right thing, especially when you’re untrained and trying to hide your identity at the same time.”

The book is organized into chapters, each of which covers one day. (There are also a couple of interpolated “Editor’s Notes,” from Marcus Hatch, a colleague of Harriet’s who is a conspiracy theorist and is, in the world of the novel, the one who wrote this book.) The first chapter takes place on May 19th, 2001, and the end of the novel is in the early fall.

Did you catch that? Yes, there is a major real-world event that also happens in Superpowers three months and twenty-four days into the storyline, and it looks like Schwartz considers that event the hook he can hang his story on.

But these superheroes are in Madison, Wisconsin, foiling rapes and bank robberies. They generally do a good job of that – with a few exceptions, which they agonize about, in the best tormented super-hero fashion – but the events of 9/11 have nothing to do with them, and making those events the anchor of the book trivializes them. 9/11 is not part of these characters’ story, and trying to shoehorn it in doesn’t help.

Superpowers is fun to read; it zips along with lots of decent scenes and nice details. It does seem to be spending an awful lot of time on generic character-building – these people aren’t that interesting, or different – but that’s fine as we expect a big finish. But there’s no big finish. 9/11 happens, there’s a flurry of other events, and the novel peters out.

It does have an ending “Editor’s Note” from Hatch, which is either meant to very strongly imply that there will be a sequel – one with an actual plot and antagonists – or that he was an unreliable narrator all along. The problem with option #1 is that it reduces this entire novel to the prologue to the real story, which we still don’t have. And the problem with option #2 is that most of the book isn’t written in Hatch’s voice, so it’s never felt like it really was written by him. (The fact that it spreads the spotlight among five relatively bland characters doesn’t help, either – getting deeply into the heads of any one of these people could have made a better novel.)

Superpowers is a pleasant read, but it’s the superhero-novel equivalent of Oakland: there’s no there there. It’s not gritty and real-world enough – despite Hatch’s claims – to work as a how-it-really-would-be book, and the superheroics are too muted to work as an escapist superhero book. What it is is yet another 9/11 novel, featuring people groping to find meaning to their lives in an uncaring world. And the addition of superheroes doesn’t help it do that, really.