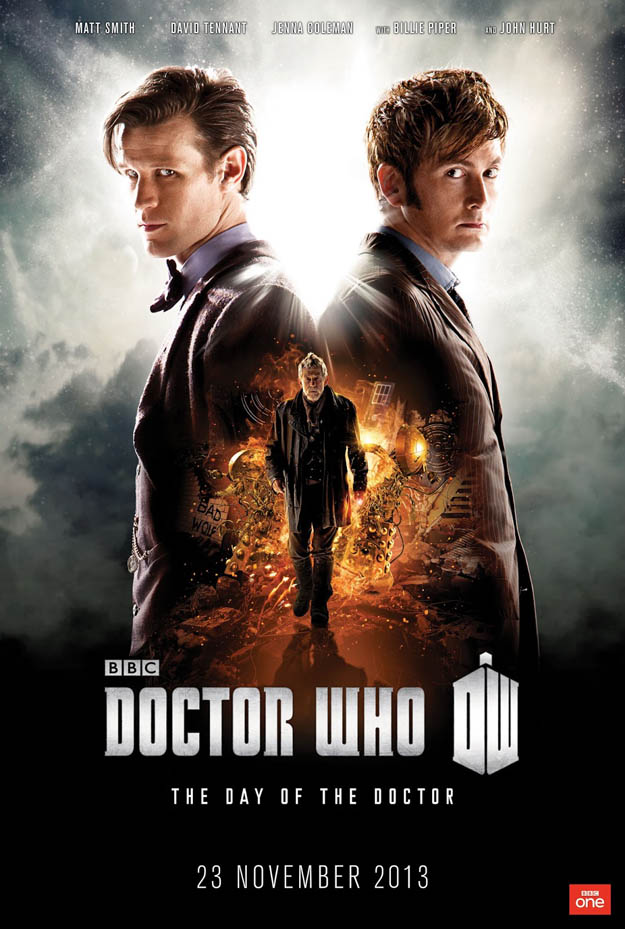 BBC announced this week details of the theatrical showings of the Doctor Who 50th anniversary special, The Day of the Doctor, with US showings details released today. Fifteen theaters in eleven US cities will be presenting the anniversary episode, starring Matt Smith, David Tennant and John Hurt as The Doctor, with Jenna Coleman and Billie Piper as their companions.

Tickets go on sale at 9AM Eastern Time, October 25th, via Fandango.com and Cinemark.com.  Considering the effect that Doctor Who fans had on the ticket website when the season premiere was to be shown in NYC (think the San Diego or healthcare.gov websites), it is presumed the demand will be heavy indeed.

In addition to the day and date broadcast, Fathom Events will be hosting a rebroadcast the evening of Monday, November 25, in over 300 theaters.  Fathom Events hosts many live and special events simulcast in theaters nationally, including live performances by the RiffTrax team, formerly the cast of Mystery Science Theater 3000.

The Doctor Who tumblr page has posted a FAQ page about the event, including  details for viewing in other countries, and the complete list of theaters participating in the Monday evening event.

The Day of the Doctor is being simulcast globally on November 23rd, the 50th anniversary of the series, so that the fans can enjoy the episode all at once, with no chance of spoilers.  The episode will be be broadcast on BBC America – check your local carrier for channel details.