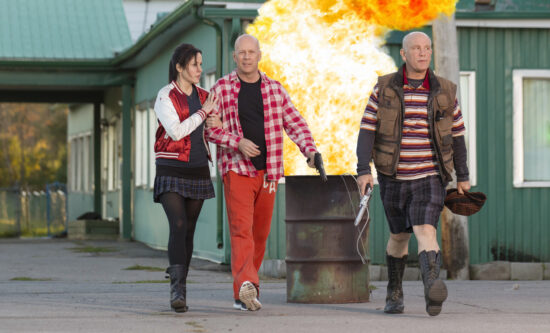 A sequel to the original sleeper hit movie Red, based on the DC Comics comic by Warren Ellis and Cully Hammer, Red 2 has come out with a new trailer today.

In Red 2, retired black-ops CIA agent Frank Moses reunites his unlikely team of elite operatives for a global quest to track down a missing portable nuclear device. To succeed, they’ll need to survive an army of relentless assassins, ruthless terrorists and power-crazed government officials, all eager to get their hands on the next-generation weapon. The mission takes Frank and his motley crew to Paris, London and Moscow. Outgunned and outmanned, they have only their cunning wits, their old-school skills, and each other to rely on as they try to save the world—and stay alive in the process.

The movie stars Bruce Willis as Frank Moses, John Malkovich as Marvin Boggs, Mary-Louise Parker as Sarah Ross, Brian Cox as Ivan Simonov, and Helen Mirren as Victoria. They’re joined this time around by Anthony Hopkins, Catherine Zeta-Jones, Byung Hun Lee, and Neal McDonough. It’s being directed by Dean Parisot, and written by Jon Hoeber and Erich Hoeber, based on the comic by Warren Ellis and Cully Hammer.