REVIEW: Comic-Con and the Business of Pop Culture 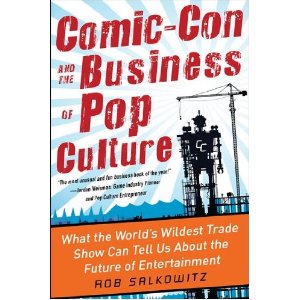 Comic book fandom was a natural outgrowth of science fiction fandom, splintering off in 1961 as the revival of superhero comics was clearly here to stay. In that year, sci-fi fan and future author Richard Lupoff published Xero, the first comics-only fanzine. Just a few years later, in 1965, the first comic convention occurred in New York City, birthplace of the first science fiction con back in 1939. The success of the zine and the con inspired others to produce their own tributes to the comics of their youth and comics fandom spread rapidly, fueled by the nationwide furor ignited by ABC’s Batman in 1966.

Interestingly, the first to write about comic conventions and its attendees was Fredric Wertham, the very man pilloried for almost single-handedly destroying the field with his poorly researched Seduction of the Innocent. Since then, fans and the ways they display their affection have been usually relegated to footnotes in other histories about the field or pop culture. One of those fans, Rob Salkowitz, has changed that with his new book, Comic-Con and the Business of Pop Culture. Coming from McGraw-Hill and billed as a glimpse into this world for the business reader, it breezily takes us through the 2011 Comic-Con International experience.

Founded in 1970 by a core of dedicated comic book enthusiasts, the San Diego Comic-Con was an appealing locale for a show, warm and inviting compared to dirty and gritty Manhattan. As a result, DC Comics and Marvel Comics began sending their editors and talent to the shows, feeding its audience. As Phil Seuling’s NY-based shows ceased operation in the mid-1970s, San Diego was virtually left alone, growing into the primary comic book-based show in the nation. Conveniently located to Hollywood, in 1976 George Lucas dropped by to begin promoting his new film, The Star Wars, handing out a poster executed by Howard Chaykin, who by then was at work on the adaptation with Roy Thomas. From that spark, the convergence between comics, media, and pop culture was inevitable.

Salkowitz’s breezy writing style and personal enthusiasm exemplifies the mindset of tried and true comic book fans who have watched, mystified, as the con has exploded in size and value to the publishers, marketers, movie studios and television networks. San Diego Comic-Con morphed into Comic-Con International and has been garnering mass media coverage for the last decade, enhancing its image as the place to see and be seen.

As the show has grown in value, the field it celebrates has gyrated, struggling for survival and relevance before being “discovered” by the pop cognoscenti. Before it was hip to be a geek, the comics faced doom in the form of dwindling sales as the newsstand contraction began in the 1970s. Seuling hit on the idea of selling the comics at a deeper discount but making them non-returnable, placing the risk on the retailer. That act alone gave rise to the comic shops which in turn created a market for independent publishers that began appearing with regularity in 1978. All or this activity continued to feed into San Diego, enlarging it until it became the mecca of comic conventions. No other show, fan produced or professionally conducted, rivaled it until Reed Exhibitions got involved a mere four years back, finally giving New York a show of its own (and challenging the con by franchising with C2E2).

The rise of video games and infusion of Manga/Anime helped change popular culture and they began gravitating to San Diego to hawk their wares.  Hollywood, seeing the success Lucas had with a direct appeal to the core audience, also began to come in increasing numbers, changing the financial calculus used to run the convention. The need for space was detonated in 1993 when DC Comics unveiled its mega booth (nicknamed Wayne’s World for direct sales guru Bob Wayne) which upped the ante for the publishers and brought comics in line with the more well-heeled video game and movie offerings.

San Diego’s influence therefore has not been fed by comics entirely but by video games, Manga/Anime, movies, and television, so the convention center now hoses multiple parallel worlds that only occasionally crossover. Salkowitz touches on this time and again without fully exploring how we got here. He spends a lot of time talking about transmedia and its rising importance without really exploring its history or talking with its pioneer, Starlight Runner’s Jeff Gomez.

The book suffers greatly from not having the field’s practitioners speak. He raises points and issues without exploring them in depth or providing the necessary context let alone speaking with people, robbing the book of its needed gravitas. Additionally, he names people without identifying who they are. You and I may recognize them, but the reader this book is aimed at may well be lost.

The marketing surrounding the book promises more than Salkowitz delivers since he skims here and there, never really connecting all the dots. The 2011 Comic-Con International was an interesting turning point where it may have gotten too large and too busy to sustain its value as a place for big announcements and events. The weeks leading up to the con, company after company broke their news in advance, trying to gain control of the news cycle as it has also gotten more and more difficult for people to register to attend or afford a room despite the explosive growth in hotel construction. The show’s economic impact in San Diego is hinted at but nothing is said of the city’s efforts to retain the con while Anaheim and elsewhere lobby heavily to relocate the event.

The book’s most interesting chapters are its final ones as he explores where the market is in 2011-2012 and the trends that may push it in one of four directions: Ghost World (collapse of the direct market, Hollywood moves away from superheroes), Endless Summer (the status quo only more), Infinite Crisis (diehard, aging fans and no one else), and The Expanding Multiverse (new technologies and new ideas grow the business in fresh ways). He paints a variety of scenarios, most of them plausible for what the con will be like in 2017 but I’m betting it’ll be a mélange of several.

I have attended the con on and off since 1978 as a fan and a working professional and have been stunned by its growth in size, scale, and importance. But, it has also gotten more difficult and more expensive to attend. Most feel they need to be there but then complain that so little real business gets conducted during the five day marathon that leaves retailers, exhibitors, professionals and fans alike utterly exhausted. Seattle’s Emerald City Con, Charlotte’s Heroes’ Con and Baltimore Comic-Con have grown as more low-cost and low-pressure options where everyone seems to have more fun. What that portends for Comic-Con International’s future is not at all addressed here and it’s a shame because where San Diego goes, pop culture is sure to follow.