THE NEW ADVENTURES OF THE GRIFFON TAKES FLIGHT FROM PULP OBSCURA!

THE MASKED MANHUNTER OF THE SKIES RETURNS! 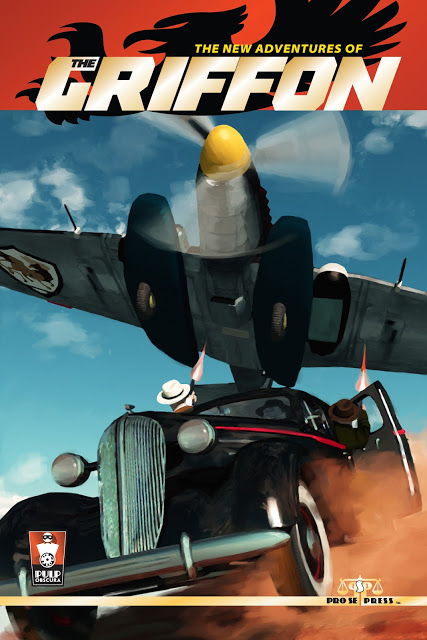 Pro Se Productions, a leader in Genre Fiction and New Pulp adventures, proudly announces the long awaited newest volume of its Pulp Obscura line!  THE NEW ADVENTURES OF THE GRIFFON!
Pulp Obscura, an imprint of Pro Se Productions in conjunction with Altus Press, brings yet another rare and classic Pulp Character back to life from Pulp’s Golden Era!    Kerry Keen is a young millionaire playboy by day to hide his nocturnal adventures as a costumed airborne crime fighter! From a secret underground hangar on his Long Island estate in the Graylands, The Griffon takes to the skies in the Black Bullet, his supercharged and heavily armed seaplane on missions of justice and vengeance!
The Griffon was created by Arch Whitehouse and appeared in Flying Aces MAgazine, his adventures beginning in the June 1935 issue.
These new tales take Kerry and his companions, Barney O’Dare and Barbara “Pebbles” Colony back into the skies for six terrific flights of danger and intrigue!
This stunning collection features an incredible cover by Mike Fyles as well as fantastic format and design by Sean Ali! Six Tales of Action, Excitement, Mystery and Amazing Arial Adventure take flight in this collection from writers Van Allen Plexico, Chuck Miller, Phil Bledsoe, S. E. Dogaru, Don Thomas and R. P. Steeves!
Beware THE VENGEANCE OF THE VIPER!  Fight alongside The Griffon against THE DEVIL AND THE BLOODY BARONESS!  Fly into the HELL ABOVE US!  Encounter TERROR OVER THE PACIFIC!  Solve THE CASE OF THE DANGEROUS DIRIGIBLE! Uncover THE CLOCKWORK PLAN OF HERR DROSSELMEYER!  All in THE NEW ADVENTURES OF THE GRIFFON!   Climb into the cockpit of the Black Bullet with Kerry Keen and fly off into THE NEW ADVENTURES OF THE GRIFFON from PULP OBSCURA!
Get your print copy today from Amazon HERE or from Pro Se’s own Createspace store HERE! for $15.00!  Coming soon for your Kindle, Nook, and Ebook Readers!
For more from Pro Se-www.prosepulp.com!
For The Complete Adventures of the Griffon Volume 1 Reprints from Altus, go HERE!  And Volume 2 HERE!
Share