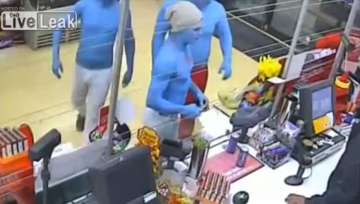 This is seriously Smurfed up.

Proving that comics lead to juvenile deliquency, we have proof of the amazing things Smurfs will do to keep Smurfette in Smurfberries. And you thought Gargamel was in the wrong…

Four men dressed as Smurfs were arrested after attempting to steal a car and beating a man in Melbourne, Australia.

According to police reports, a 37-year-old man was walking out of a 7-Eleven just past midnight when he was approached by a man that looked like Papa Smurf, who asked for a cigarette. But the victim refused to light the cigarette before handing it over, and had to endure Papa Smurf’s wrath. He had also noticed that three other men, all similarly dressed as Smurfs, were attempting to simultaneously hotwire a car.

Australian police released the store’s surveillance video to find the four men responsible for the crimes. Three 19-year-olds and an 18-year-old came forward to admit to the crime and were promptly arrested.

And it gets worse– Papa Smurf was arrested in New York.