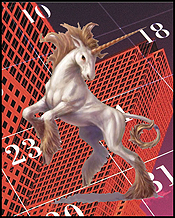 Okay, let’s agree that 2012 wasn’t a bad year. It wasn’t a good year, either. (Does that mean it wasn’t tired?) It just…wasn’t. It had no reality other than the one we slathered onto it, and either do minutes, seconds, hours – the whole temporal shebang. (All hands brace for Blather.)

Once upon a time…no, let’s just say once the ancestors who still live deep within us observed certain natural events and recurrences and used them to structure their lives and somewhere in the ancestral murk they gave the intervals between these events names and when a lot of intervals had passed and the universe committed us, we homo sapiens acted as though the names were real and – heck, we probably believe that they are. We place labels on the unknowable and believe the labels are the reality.

Anyone seen a unicorn lately?

There were obvious benefits to believing these illusions – this time stuff. For some of us, probably for most of us, these phantom seconds and hours and so forth help prevent our lives from being a tumble through chaos. If they weren’t useful, evolution would have dispensed with them before now. (Can you define now?)

Of course, not everything is part of an interval and maybe we should be glad. How boring would our lives be if they were ticked off by a metronome? If our happenings were utterly predictable? A little surprise occasionally brightens our…I was going to type “days,” but given the context, it might be better to use the word “existence” instead.

I’ve had some good happenings this past yea…ooops!…this past interval. Enjoyable books, movies, television. Enjoyable companions. A few laughs. New snow in the front yard and dazzling foliage in the fall…ooops again! Not “fall,” not another damn time word. (Maybe “state of existence after a warm interval”?) I’ve taken some interesting courses and finished writing a book and taught a comics writing class and traveled a bit and there is nothing much wrong with any of that. I should be grateful for all of it and I probably am.

But the interval had its negatives, too. My world is emptier without Jerry Robinson and Joe Kubert. Although it was kind of exciting too watch Hurricane Sandy shake the trees outside the window, the storm wasn’t really very friendly. And I could have done without the kinney stoones. It has been a dismal exercise in masochism to learn of the behavior of our politicians and to witness a presidential campaign that might have shamed Thomas Jefferson. Lies have been told and the telling of lies has gone unpunished and we wonder if it is now acceptable to lie. And if it is, what happens next?

That’s what we always want to know, isn’t it? What’s next? And this mystery, this next, is what none of our constructs can help us with. Not que sera sera, not “what will be will be” but rather, “what is, is.”

Have you defined now yet?