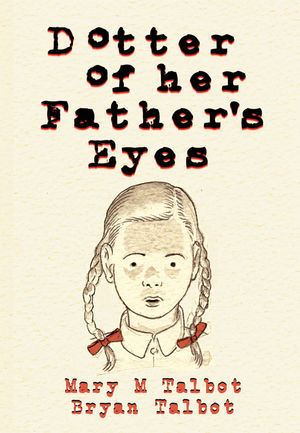 Mary and Bryan Talbot’s Dotter of Her Father’s Eyes has won the Costa Book Awards biography of the year. They won the £5,000 biography prize for a book that interweaves the true and tragic story of James Joyce’s daughter Lucia with Mary’s own troubled relationship with her father, the eminent Joycean scholar James S. Atherton.

The Talbots have known of the win for several weeks. “It has been really hard keeping quiet about it,” said Mary. “We were astonished. Just being shortlisted was amazing and hearing we’d won the category was stunning. We’re delighted of course, both personally – it’s the first story I’ve had published – but also for the medium, I can’t believe a graphic novel has won.”

It is not the first graphic work to win a major literary prize – Art Spiegelman’s Maus won a Pulitzer in 1992 and Chris Ware won the Guardian first book prize in 2001 for Jimmy Corrigan: the Smartest Kid on Earth – but the Costa award is still a significant moment for the graphic medium.

“It is a good thing for graphic novels as a whole,” said Bryan Talbot whose prodigious output includes The Adventures of Luther Arkwright and Alice in Sunderland as well as strips for Judge Dredd and Batman. “Graphic novels are becoming increasingly accepted as a legitimate art form.”

The last graphic novel spike came about 25 years ago with the popularity of books such as The Dark Knight Returns, Watchmen and Maus. The problem then, said Talbot, was that there were not enough books to feed this. “By the time you’d read a dozen or so of the best titles, there wasn’t enough left to keep this nascent interest going. Since then, there has been an increasing number of graphic novels published and now we have this whole canon of quality work.

“We are living in the golden age of graphic novels. There are more and better comics being drawn today than ever in the history of the medium and there’s such a range of styles of artwork, of genre and of subject matter.”

Judges called Dotter of Her Father’s Eyes “a beautifully crafted” work “which crosses the boundaries between literature and the graphic genre with extraordinary effect”.

Congratulations to Mary and Bryan!