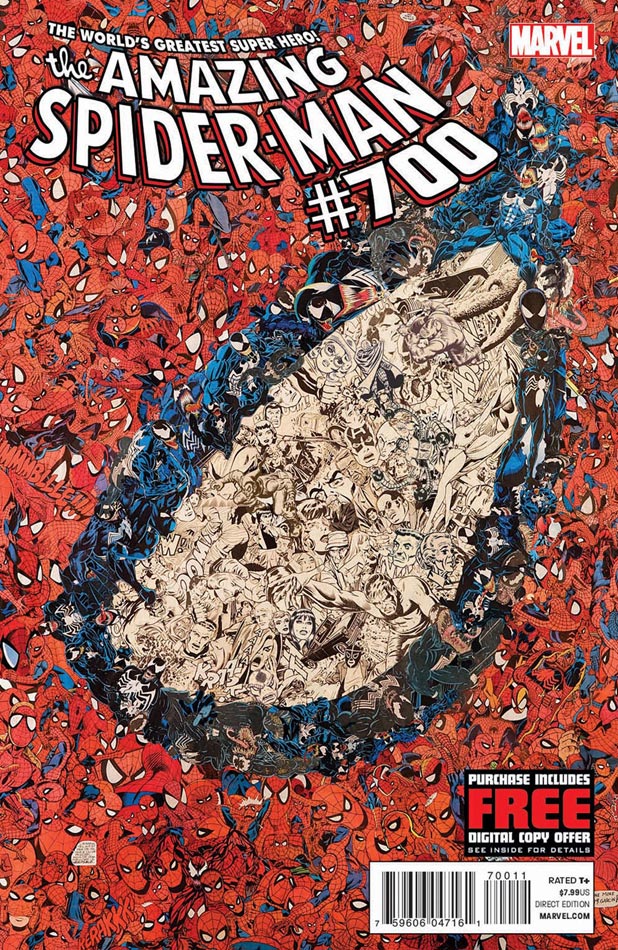 I already said in my discussion of Amazing Spider-Man 698 that I had utter faith in Dan Slott.  Yes, the plot twist he’s spun here is, at the least, controversial.  It proves, simply, that he’s got what it takes to sell  real estate. This is a story he’s been setting up for several years.  Slowly, deliberately, under our noses.  He’s taken an almost standard plot twist, seen in countless comics, movies and TV shows, and built it into a firestorm.

And I want to go to the people who don’t like it and take their comics away.  because if they don’t like this storyline, they just don’t like comics.

Okay, now that we’re behind the jump, we can talk.

Otto Octavius, a.k.a. Doctor Octopus, has won.  He’s transferred his mind into Peter Parker’s body, and vice versa.  And then watched his body die, with Parker’s mind trapped within.

OK, now at first hearing that’s a move that will make you want to…I dunno, draft a harsh letter to the Times.  It should NOT make you want to send death threats to the guy.  And for those who have, I can but shake my head and wish that someday they allot less of their brain capacity for comics love, and more for basic human decorum.

But first hearing usually means you have not read the book, which as a rule, means you do not have all the facts.  Now of course, this is the internet, and facts only tend to slow down one’s speed in getting one’s thoughts posted, so I understand the problem.  But I said, and said again, to wait until you had read the book before you get out your brickbats.

I dunno about you, but I’m dead chuffed to read Superior Spider-Man.

Yes, everything you heard was true; the mind of Peter Parker is dead, and Doctor Octopus is now in the body of Spider-Man, with all of his memories and abilities intact.  None of that “Tell me something only Peter would know” stuff will wash here— indeed, Dan hangs a lampshade on that trope by having it fail for Peter while desperately looking for help to undo his predicament.

But that’s not the end of the story. Indeed it’s barely the first plot twist before intermission.

The transfer between heads is not an all-or-nothing deal. Peter’s self, his soul, if you will, is in Otto’s mind, but all of Otto’s memories are still there.  It’s as if they switched homes and left all the furniture behind.  So Peter can look through Otto’s memories (some of which are quite…unsettling), and knows how to use all of Otto’s inventions, which precipitates his escape from The Raft.  But it gives him a chance to really know Otto and understand his motivations.  It’s the most perfect case of the old “walk around in his shoes” cliche.

Peter realizes that there’s still a tenuous link between the two.  And just as he has pored through Otto’s memories, as he’s dying, with his own body standing above him, he forces Otto to experience all of HIS memories.  Otto feels the remorse of losing HIS Uncle Ben to a thief, feels himself buried under tons of scrap metal but know he HAS to get up.  Otto realizes that now HE has the power, and understands the responsibility.  Confident that Otto gets the point, Peter (in Otto’s body) dies.

So we don’t get Doctor Octopus in Spider-Man’s body, ready to begin a reign of terror on New York, and we have to sit there and watch it happen.  we get Otto Octavius in Peter Parker’s body, who finally gets that Spider-Man has been in the right, and resolves to carry on the good fight.

But let’s go another level down.  He immediately realizes that there are so many things he could do as Spider-Man that Parker couldn’t, or simply didn’t have the discipline to.  He hasn’t given up on beating Spider-Man,  he’s going to prove he’s the better man…by being the better Spider-Man.

Tell me that’s not a new twist on the Bad Guy Turned Good.  This is the best twist on the trope since the first issue of Thunderbolts.  He really is going to do good, but only to prove a point.  To a dead guy.  I mean what’s he gonna do, be Spider-Man for a year, and then say, “HA! I was Doctor Octopus all along, now ADMIT I’m right! ADMIT it!”

Damn, now that I think about it, he might…

Avenging Spider-Man serves as an epilogue to the events in Amazing #700.  We hear more about how much better Otto thinks he is than Peter, how much better Peter could have done, and generally making it clear he thinks he should have won every fight. But by the end of the issue, he has to admit that he never did, and based on all he’s seen and learned, Spider-Man won every fight fair and square, because he was the better man.  That’s a cold hard fact to have to come to terms with.  But even then, he’s got a way to beat Spider-Man, and is putting all his not inconsiderable mental talents to that end. Even if nobody will ever know.

Will we start seeing pangs of conscience?  Almost certainly.  Will we see people suspect that something is amiss?  Clearly.  Will they be clichéd and dull examples of same?  I wouldn’t put money on it.

Now let’s get the Comic Book Science out of the way.  I can think of at least a half a dozen ways this can be undone.  And as much as Marvel swears blind that this will be for the long haul, it WILL be undone.  We’ve seen deaths, broken backs, shattered spines, and a lot more examples of The Old Order Changeth-ing that have returned to first position.  So if you plan to Quit Comics Forever, so be it.  If you plan to stop buying the book until the right Spider-Man is under the mask, so be that.

But I think you’re going to miss one hell of a ride.