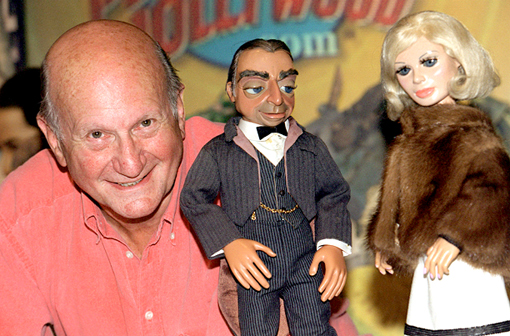 Gerry Anderson, creator of Thunderbirds, Space: 1999, Supercar, Captain Scarlet and the Mysterons, Joe 90, UFO, Fireball XL5, Stingray, and many other science fiction and fantasy shows, has died at the age of 83.

Gerry was best know for his “Supermarionation” series, featuring detailed marionettes and a science-fiction based storyline.  His ex-wife Sylvia collaborated frequently with him, most famously voicing Lady Penelope Creighton-Ward in Thunderbirds.  The shows were a first step for many well-known actors and creators, including Lois Maxwell (Moneypenny in the early James Bond films), character actors Shane Rimmer and Jaremy Wilkin (Blake’s 7) and special effects master Derek Meddings (Star Wars and the James Bond franchise).  He made successful forays into live action as well, with the series Space: 1999 and UFO, and the feature film Journey to the Far Side of the Sun.

Gerry suffered from Alzheimer’s Disease for several years, and spent much of his time as a celebrity ambassador for The Alzheimer’s Society, raising both funds and awareness for the disease.  His condition worsened in the past six months, which limited his ability to both work for the organization, and to serve as consultant on a Hollywood remake of UFO.

Gerry’s son Jamie has requested, in lieu of other remembrances, that people donate to The Alzheimer’s Society via Just Giving. Our condolences to his family and friends.