INTO THAT GOOD KNIGHT
A Review of The New Adventures of Richard Knight
by Andrew Salmon
(Disclaimer: Andrew Salmon writes for Pulp Obscura) 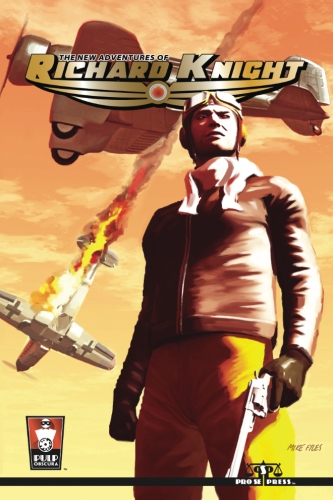 When Pro Se Press got together with Altus Press to create the Pulp Obscura line, it was a match made in Heaven. As Altus gave rabid pulp fans top-notch collections of forgotten heroes from the Golden Age of pulp, Pro Se wrangled together a bevy of New Pulp’s finest authors to create anthologies containing new tales featuring these forgotten heroes – the perfect melding of past and future.
Submitted for your consideration is first release in the Pulp Obscura line: The New Adventures of Richard Knight.With Altus’s first collection of original Knight tales comes this first volume of new Knight stories by some of New Pulp’s best. And it does not disappoint.
But first a little background. For those of you who don’t know, Richard Knight was a 1940s pulp hero in the rich playboy by day, ace pilot and secret spy designated Q by night. Created by Donald Keyhoe, Knight and his trusted assistant Larry Doyle worked for General Brett who gave them strange cases featuring science-fiction elements solved with espionage, aerial escapades and two-fisted action. A fine introduction by Tommy Hancock provides all the information you’ll need before diving into the tales themselves.
In The New Adventures of Richard Knight, we get six brand new adventures to add to the original canon. New Pulp scribes Josh Reynolds, Barry Reese, Terry Alexander, I. A. Watson, Frank Schildiner and Adam Lance Garciado the honors this time out and the result is a mixed bag of pulp goodies.
Reynolds gets things going with Hell’s Hands, a tale featuring aerial pirates threatening European skies. There is a lot of great action in this first outing and the villain is well drawn. For all its merits, the tale does suffer from a little too much character set up since the tale wraps up without giving us a true look at the villain. I can’t help thinking that Reynolds has plans for this baddie which will play out later. All well in good, but the absence of sufficient details in this story lessens one’s enjoyment of it. The story more than makes up for it with its lightning pace and great action sequences and is a great way to get this party started.
Richard Knight and the Stones of Heavenby Barry Reese is next up. In this yarn, Knight goes up against a group of artifact-hunting Nazis bent on created a death ray for nefarious purposes by collecting the six stones of Heaven and harnessing their strange power. Most of the action takes place on the ground, rather than in the air, but the tale moves well and is an enjoyable traditional pulp actioner that would not be out of place in Knight’s original run. Good writing and clear characterization are on display here as well, making for a fun read.
Terry Alexander gives us The Bapet, a tale with traditional horror elements as a small town is terrorized by a supernatural creature. All the makings of a good, scary action tale. However it doesn’t quite gel here. It’s as if Alexander is fitting Knight and his supporting cast to an existing plot rather than The Bapet reading like a true Knight tale. The result is a somewhat engaging read with gore and scares aplenty yet feels somehow out of place.
The Hostage Academy by I. A. Watson is another strong entry in this collection. The death of a senator in a plane crash barely crosses Knight’s radar but when the love of his love, Benita, meets a similar fate, then it’s time for this Knight to go on a crusade. Strong characterization highlight this very personal mission of Knight’s and emotions run high as the airman tries to solve a compelling mystery in his search for vengeance.
Fear From Above by Frank Schildiner has Richard Knight going it alone in an intriguing adventure slightly hampered by its wordiness. The strange disappearance of the crew of a ship out of Jack London’s The Sea Wolf leads Knight on an adventure that sets itself apart from the norm. Some great action and vivid description make for a rousing adventure in the air, on the ground and on the high seas.
Crimes of the Ancients by Adam Lance Garcia is my personal favorite in this fine collection. It starts with a bang and the pace does not let up. A character-driven tale, it features Knight going toe-to-toe and quip-to-quip with a former love interest. The plot is never fully explained but given that classic pulp tales generally featured the simple Good vs Evil plot to begin with, it’s interesting to see a detailed breakdown of the situation Knight finds himself in being left to the readers. It’s as if Garcia is saying to pulp fans: “You’ve read enough of these great action yarns, you already know what the story is here.” Although the banter did get annoying in spots, this new approach to a traditional pulp tale, the ending in particular, left a pleasant taste in this reader’s mouth after closing the book.
The New Adventures of Richard Knight is sure to please pulp fans, old and new, as well as any action junkie. It’s available in print and as an ebook so they’ve got your preferred method of reading covered. If you’re a fan of action fiction, then this book is for you. Don’t miss it!
Share