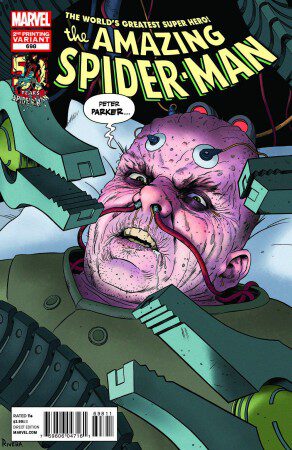 I’m not going to show you the spoiler.

I’m not going to link to the spoiler.

I’m not going to allude to the events in the spoiler.

I’m going to discuss the REACTION people are having to the spoiler.

Now, Dan Slott has a Scorched Earth, Zero-Tolerance policy on spoilers for both this issue, and the two that follow, leading to the 700th (and LAST) issue of Amazing Spider-Man:

“Heads up: People are getting their hands on review/advance copies of ASM #698. I see anyone spoiling it ahead of time (before November 21st): I will BLOCK you for life on ALL social media. Very serious. We’ve worked VERY hard to keep this stuff under wraps and make this fun for people WHEN they read the book. We’ve done all we can on this end– now it’s up to you.”

He’s kept the pressure on by thanking the few people who have seen the page for keeping their mouths shut.

So as I say, I do not intend to discuss the spoiler itself, That is, other than to say it is as ground-shaking as he’s promised, or more precisely, threatened.

In honesty, it’s not technically a spoiler, in that it’s not the end of the story. It’s a single leaked page, upon which is a pretty cool plot twist. To say it’s a spoiler would be like saying the “spoiler” of Deathtrap (out today on Blu-Ray via the Warner Archives) is “And then they kiss!” That’s not the spoiler, it’s a major twist in the middle of the story, one that turns the tale on its ear. It does not tell you the ending, not even close.

The issue is expertly written.  You read it through, and then this happens, and you immediately go back and re-read it, saying, “When did…” and you realize the answer is BEFORE THIS ISSUE EVEN STARTED.  And you read it through again, and now every line means something WILDLY different.  It’s a delightful twist, and if you went and looked at the page online yesterday, you did NOT get the full impact of the moment, and if you go and read the issue today, you will.

If you’re a Doctor Who fan, I can best compare this to the big WTF moment at the end of The Almost People.  This is as good a conversation starter as that – when did it take place, how was it done, and most importantly, how will he get out of it?

People who have seen the page or read the issue seem to be making what is likely an incorrect assumption. They presume that the event in question is a harbinger of the status quo for the new series. They seem to forget that there’s two issues to go after this one. Dan Slott has started, whipped fans into a frenzy, and ended bigger storylines than this in less time. If this same exact,event occurred in, say, 648, people would be kicking up their heels and licking their lips and saying “THIS is gonna be fun!”

But the assumption is that the event will not change, not end, and represents what we will be reading in Superior Spider-Man in a few months. People who have been reading comics all their lives are suddenly convinced that this event is a fixed point in time.

And I have to wonder why.

If Superior Spider-Man was to be taken over by a new creative team, I’d be right there with you, convinced that we were in for months of A Bold New Direction, until cooler heads prevailed and we got back to reading about Spider-Man again.

This is DAN SLOTT. The man who successfully washed the taste of One More Day from our mouths with a narrative mix of peppermint schnapps and Sprite. The man who, when seeing that all the creative teams were being spun about like deck chairs in a storm on an ocean liner, lashed himself to the mast and nailed his feet to the deck.

You don’t know how it happened.

You don’t know what happens in the next one, two or three issues.

You can only look back at past performance, and extrapolate as to whether or not he’s going to write something you’ll enjoy. Not “agree with”, not “won’t get upset about”, but ENJOY.

I am not worried.