A Doctor A Day – “Army of Ghosts / Doomsday”

The mysterious spectral shapes that have been appearing across London are not what they appear.  What becomes a Doctor Who fan’s greatest wish come true starts as an…

“Daleks have no concept of elegance.” “This is obvious.”

Returning to Earth, The Doctor and Rose are surprised to learn that ghosts have been appearing all over the world.  Rather than being met with fear, they’ve become a national phenomenon.  People await their by-the-clock appearances and disappearances daily, and happily discuss the visitations with each other and on the TV.  What they don’t realize is they’re actually being caused by experiments at the Torchwood Institute, attempting to perfect a machine that would cross dimensional barriers to obtain new energy sources.  But even that is only means to an end, to open a mysterious sphere that resists all testing and analysis.  As The Doctor attempts to analyze the ghosts, Torchwood detects the shift in the field and realizes he’s in the area.  So when he identifies the source and heads there, they’re ready for him.

Following from Queen Victoria’s dictate, Torchwood exists to study alien technology as a defense for the nation, and they view The Doctor as an enemy, regardless of the number of times he’s saved the world.  He’s immediately taken into custody and the TARDIS impounded.  Showing him the sphere, he identifies it as a void ship, designed to travel, and hide, in the space between dimensions. He convinces them to stop the testing, but the people (well, I say people…)  behind the breach have been slowly taking over the staff, and they initiate a final breach, and stand revealed as…Cybermen.  The ghosts across the world fully materialize as Cybermen, and almost immediately seize control.

Ah, so they’re hiding in that void ship sphere, right?  Wellll, no.  The Void Ship was what pushed through to our world first, a weakness the Cybermen took advantage of.  It’s a life raft for a race that thought they would not survive its final battle.  It’s the Daleks.  Carrying a Genesis Ark, they plan to repopulate the world with new Daleks, and with no Time Lords to stop them, nothing should stop them from conquering the universe.

Well…ONE Time Lord.  And luckily, a small army from Pete’s world, who cobbled together technology to follow the Cybermen through the Void.  But is that going to be enough to fight the two most powerful enemies The Doctor has ever faced at once?

The Doctor Who team did a great job keeping the return of the Daleks secret, basically by making it blatant that the Cybermen were returning.  There’s not a Whofan on Earth who hasn’t considered how cool a Cybermen/Dalek team-up would be, and to finally see it was a surprise indeed. The first discussion between the two foes is absolutely hilarious. 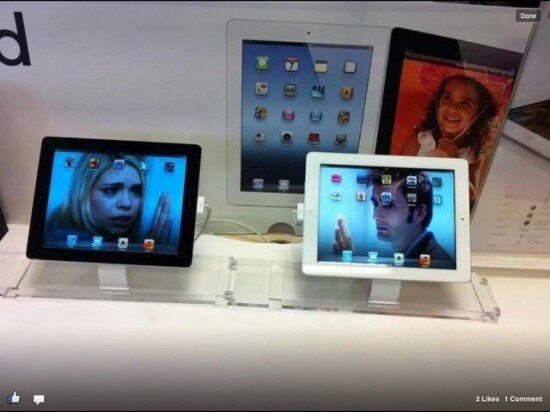 A great close of the season, and a happy ending for Rose and Jackie.  Following up on the idea of alternate universe replacements, Pete has almost no hesitation in accepting “our” Jackie and Rose as his new family, and since it meets the happy ending parameters we want, we do as well.

The Cybermen got a small upgrade in this adventure, the retractable wrist-cannon.  They had no offensive weapon in the earlier adventure, and had to “delete” their enemies hand-to-hand.  We also saw a rather big change to the Daleks as well, with the Cult of Skaro, three Daleks bred to have independent thought, to come up with ideas that a normal brute-force Dalek never could.  It’s an idea that had been addressed before, with the need to find Davros in Destiny of the Daleks.

The original “Ghostwatch” was a very controversial one-shot special presented on the BBC in 1992, and never repeated in the UK.  Presented as a reality/documentary show about ghosts, it was in fact a staged drama.  British chat show legend Michael Parkinson  hosted what was to be a live investigation of spectral activity in a house in North London eventually resulted in the ghosts taking control of the broadcast and remotely possessing Parkinson as the show ended.  Even though it was touted as a drama, complete with “written by” and cast credits in the opening, the show was met with a reaction similar to the classic War of the Worlds broadcast.  There’s copies of it floating about the Internet, and is well worth a look.

Musical motifs from what would become the Torchwood theme appear in this episode’s score, which rather makes sense since Murray Gold provides the music for both.

Yes, that is Freema Aygeman as a worker at Torchwood.  Doctor Who has become almost legendary at choosing from its own for larger parts— Eve Myles will be back shortly for Torchwood, and Karen Gillan made her first appearance as a prophetess in The Fires of Pompeii.  It didn’t start in the new series, either.  Colin Baker, Doctor number six, first appeared as Commander Maxil in Arc of Infinity.