Surpassed only by the Daleks, the Cybermen are the Doctor’s greatest foes.  So like the former, it was only a matter of time before we would see…

“If you want to know what’s going on…work in the kitchen.” 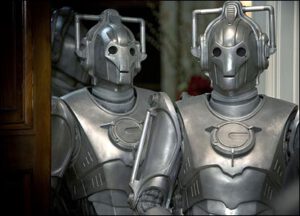 The TARDIS falls out of the time vortex and crashes…in London.  Well, no, not quite, it’s a parallel Earth, one where Zeppelins are an established mode of transportation, and Rose’s dad Pete is not only alive, but one of the most successful businessmen in England.  The Doctor cautions her that this Pete is not her father – there may be another Jackie or even a parallel Rose in this world.  He’s partly right – Pete and Jackie are married, and fighting, but there’s no Rose Tyler.  With the TARDIS recharging, the trio does a bit of investigating.  Pete Tyler has sold his company to John Lumic, owner of Cybus Industries, who make the earbuds that literally everyone wears, a replacement for the smartphone.  Intrigued at anyone with that much influence, The Doctor gives in to Rose’s wishes, and they plan to visit Pete.  Mickey, on the other hand, visits the home of his grandmother, who on their world, raised him but died five years ago, only to learn that here, she’s still alive.  The Mickey, or rather the Rickey of this universe, however, is a freedom fighter against Lumic’s Cybus corporation, which has become so a part of society it makes Apple look like Onkyo.  Lumic has a new process for preserving the human brain and “upgrading” human beings. when the UK President refuses to allow the procedure to be tested, Lumic takes the law into his own hands.  He lures a number of forgotten men into a truck and uses them to create his new humans – Cybermen.

A solid pair of episodes, bringing a classic foe back in a new way. These are not the Cybermen from our universe – they appeared on the planet Mondas, Earth’s twin that shot out of orbit eons ago.  This gives them a chance to re-introduce an old enemy without having to educate the new fans about their history.  Daleks are so endemic to British culture, there was no need to re-introduce them, they could just hit the ground running… or rolling.

As more and more Cybermen appearances have stacked up, there’s been some confusion as to whether we’re still seeing the Cybermen from “Pete’s World”, or the ones from ours. The “C” logo has disappeared from the chest, suggesting we may now be looking at native Cybermen. It’s hoped that Neil Gaiman’s upcoming episode, tentatively titles “Last of the Cybermen” will address this issue.

The episode was inspired by a Big Finish audio adventure, “Spare Parts” by Marc Platt.  While the final script was quite different from the original story, Davies made sure Platt was paid a fee and got a “Thanks to” credit in the episode.

Mickey’s departure is the first voluntary one for a Companion in the new series.  In the old days, willing departure for The Doctor’s friends was the rule – in the new series it’s the exception.  So far only Mickey and Martha Jones were the only ones to leave the TARDIS by their own choice, and in both cases they came back to help again.  Noel Clarke brought Mickey to new places in the episode, finally becoming his own man, both in how he handles himself, and being able to come to terms with his relationship with Rose.  Getting to play a dual role also showed off his breadth as an actor.  We got to see alternate Roses and Petes as well, but not both at the same time.

This story(and an upcoming one that addresses this world again) are a classic example of the TV Tropes about parallel universes, specifically that the alternate version of a main character doesn’t really count.  Rickey dies, but that’s okay, Mickey’s ready to take his place.  Even the Jackie of Pete’s World dies, which sucks for Pete, but since The Doctor has spent the whole episode reminding Rose (and the audience) that “She’s not your mother”, it’s no big deal, just good for a moment of pathos.  And they drive that home by making sure we see “our” Jackie at the end of the episode.  Pete’s the only one we really care about, because “Our” Pete’s already dead.  Besides, the other Jackie was a bitch.