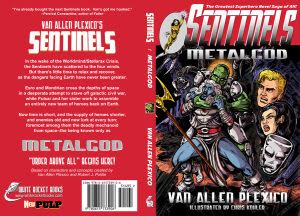 The Next Epic Adventure in “The World’s Greatest Superhero Novel Series” Begins Here!
http://www.amazon.com/Sentinels-Metalgod-Van-Allen-Plexico/dp/0615733905
White Rocket Books proudly announces the release in trade paperback format of Van Allen Plexico’s SENTINELS: METALGOD, the newest adventure in the famed and very popular cosmic superhero saga!
Debuting in 2008 with Sentinels: When Strikes the Warlord from Swarm Press, Plexico’s Sentinels series has built a worldwide base of enthusiastic fans eager for another installment in the action-packed series.  Now the new volume has arrived—as has perhaps the deadliest threat yet encountered: Metalgod!
In the wake of the Worldmind/Stellarax Crisis, what’s left of the team has scattered to the four winds. Brachis and Mondrian cross the depths of space in a desperate attempt to stave off galactic civil war, while Pulsar and her sister work to assemble an entirely new team of heroes back on Earth. Time is short, the supply of heroes is shorter, and no one is exactly who he appears to be.  And into this precarious situation arrives the deadly and enigmatic mechanoid from space—the being known only as METALGOD!
Presenting the first volume in the new SENTINELS story arc—a great “jumping-on point”—where action and adventure await at every turn, and nothing is quite what it seems!  Interior illustrations are by fan-favorite series artist Chris Kohler, who also takes over cover art duties this time around, assisted with fantastic color work by the incomparable Sarah White.
“This book accomplishes several major things,” says Plexico of METALGOD. “We get to see Pulsar fighting to become the leader everyone hopes she can be, attempting to assemble an entirely new team before another disaster strikes—as you know it will.  We see Esro and Mondy assuming their rightful roles as members of the Elites, dealing with a coming galactic war. There’s action, danger, and even comedy—and we get what I think is the biggest shock ending in the series to date.  Better buckle up!”
“I’ve already bought the next Sentinels book! Van’s got me hooked!” says Percival Constantine, author of Fallen.
“Spectacular.  Action-packed. Imaginative and wonderful,” adds Pulp Fiction Reviews.  “If you grew up loving the Avengers comic books from Marvel, these books are for you in a big, big way.”
The previous volume, Stellarax, was nominated for Author, Artist, and Novel of the Year by PulpArk.
White Rocket Books is a leader in the New Pulp movement, publishing exciting action and adventure novels and anthologies since 2005, in both traditional and electronic formats.   White Rocket books have hit the Amazon.com Top 15-by-Genre and reached as high as #2 on the New Pulp Bestsellers List, and have garnered praise from everyone from Marvel Comics Vice-President Tom Brevoort to Kirkus Reviews.
SENTINELS: METALGOD is a $14.95, 6×9 format trade paperback from White Rocket Books.  (Previous volumes in the series are available in two omnibus paperbacks, and each is a $2.99 e-book for Kindle and other e-readers.)
194 pages; 5 full-page illustrations by Chris Kohler
ISBN-13:   978-0-61573-390-6 (6×9” Trade Paperback)
On Amazon.com:  http://www.amazon.com/Sentinels-Metalgod-Van-Allen-Plexico/dp/0615733905
http://www.whiterocketbooks.com