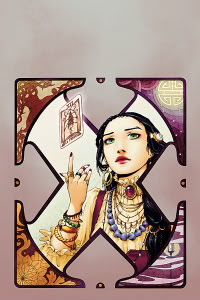 Fresh off another successful Grendel

miniseries ([[[Monster Men and Mad Monk]]]), Matt Wagner is switching gears so hard he may have just shredded the transmission.

A revival of the occult heroine Madame Xanadu

Sure enough. Wagner is writing the Vertigo series, the first issue of which debuted this week. It’s, well, odd, for lack of a better word. The first chapter begins in Arthurian times as Xanadu tries to prevent Camelot’s bloody fall.

Wagner channels a bit of Shakespeare’s lyricism in Xanadu’s dreamy, esoteric narration. And much of the goal seems to be recasting the common legend in surprising ways, not the least of which is Merlin as an old horndog.

The art, by relative newcomer Amy Reeder Hadley, is as graceful and natural as the titular character. The slight manga influence further similarizes the book to Elf Quest

, which it mirrors fairly closely in tone.

The only real problem so far is the lack of scope in the first issue. Not a whole lot happens, at least till the last page, and there’s almost nothing to hint that this series is going to be an epic love story between [[[Xanadu]]] and the Phantom Stranger that lasts through several ages. I had to check the PR cheat sheet for that info.