DOUBLE FIGHT CARD-SALMON GETS IN THE RING WITH TWO! 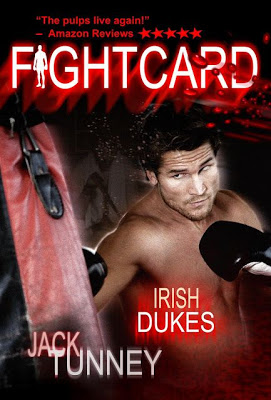 This Fight Card installment kicks off in 1950’s Berlin where Sergeant Kevin Crowley is duking it out with a Russian boxer. Crowley has something to fight for beside unit pride. He’s  due a 30-day leave before transferring to Japan and during the fight he’s told those will be off the table should he not prevail.

Afterwards, Crowley begins his much-deserved leave (did you really think he’d lose the opening bout of the tale?) and heads to Ireland looking for his roots. Well, it turns out those roots are being choked by weeds and Crowley is thrust into a battle of wills with a black-hearted, gouging landlord looking to keep the entire neighborhood under his boot heel.

The pace of this one is very brisk and, when you consider the plot elements, that’s no easy feat. Not only are some top-notch fight scenes needed here but also Crowley’s family history and surviving members are all very neatly drawn. And just enough of details of post-war Berlin and narrow Irish streets flesh out the settings. Don’t let the length fool you, this is a full tale. Sure, it can be read quickly, but that’s a must during this busy age we live in. And it satisfies. You’ve got fists a-flying, a budding love interest, standing up to bullies, cowardly scare tactics and a lead character who doesn’t take any bunk from anyone.

I’ve read a handful of the Fight Card series to date and each one has been a winner. If you’re already a fan and are looking for the next tale to read, then this is a great place to continue. If you’re new to the Fight Card line, then Irish Dukes will scratch you right where you itch. I enjoyed it and I recommend it. Check it out!
THIS KO IS A-OK!
A Review of Robert J. Randisi’s The Knockout
by Andrew Salmon

Robert J. Randisi takes on the identity of Jack Tunney for this installment in the stellar Fight Card line. The Knockout introduces us to Frank Corleone. Once a contender, an injury has knocked him out of the ring and into the PI game. With gumshoe work not paying all of his bills, Corleone also works as a part-time sparring partner at his friend’s gym.

But when that friend turns up dead and it looks like murder, Corleone has to hit the streets, and a few lowlifes, to get to the truth.

Part hardboiled mystery, part sports tale, The Knockout has got something for everyone. Corleone’s single-minded pursuit of the truth leads him down some dark alleys and into a fight or two whether its with his fists, his wits or his conscience. The end result is an engaging mystery that doesn’t skimp on the fisticuffs. You’ve got organized crime, shifty lawyers, hard line cops and Corleone’s dead friend is in the middle. A great mix.

This one is also something of a change of pace as fighting does not save the day. Sure, there’s plenty of it and the fight sequences are well written, but the reason Corleone fights, although integral to the plot, do not resolve the plot in and of themselves as is sometimes the case with fight stories. It’s the combination of fighting and gumshoe work that bring this fun ride to a rollicking conclusion.

I enjoyed The Knockout and recommend it to any fan of fight fiction, detective yarns or action junkies of all stripes. This one is a knockout!