Today, comic book fans may recall Warren Beatty’s adaptation of Dick Tracy as a memorable misfire. When it was released in 1990, it was met with, at best, mixed reviews and while it performed respectably at the box office, missed Walt Disney’s estimates so the hoped for franchise was stillborn. Blame could be squarely placed at Beatty’s feet since he had a strangle hold on the film as its director, producer, and star. It got so crazy that poor Kyle Baker had to use only three approved head shots for the 64-page comics adaptation, which stretched even his considerable skills.

We have a great opportunity to reconsider this film now that Disney is releasing it tomorrow on Blu-ray.  One of the things about the production is that Beatty wanted to recreate Chester Gould’s strip as faithfully as possible, which meant he limited the color palette to a mere seven colors, predominantly red, blue, yellow, and green – all the same shade. Surrounding himself with a veteran crew consisting of production designer Richard Sylbert, set decorator Rick Simpson, cinematographer Vittorio Storaro, visual effects supervisors Michael Lloyd and Harrison Ellenshaw, and costume designer Milena Canonero, Beatty got the best looking film possible. The translation was so faithful that mainstream audiences took issue with the look.

What Beatty seemed to forget is that adapting from one medium to another requires certain accommodations and this experiment just didn’t work. In vibrant Blu-ray, after a digital restoration, its sharply garish and not necessarily for the better. What did adapt better were the makeup designs that replicated the grotesque Gould rogues gallery thanks to the ministrations of prosthetic makeup designers John Caglione, Jr. and Doug Drexler.

Only someone as major as Beatty could have corralled the roster of stars to don the latex, including Dustin Hoffman (Mumbles), William Forsythe (Flattop), James Tolkan (Numbers), Mandy Patinkin (88 Keys), R. G. Armstrong (Pruneface), Henry Silva (Influence), Paul Sorvino (Lips Manlis), James Caan (Spuds Spaldoni), Catherine O’Hara (Texie Garcia), and Robert Beecher as (Ribs Mocca). In fact, there are probably half-a-dozen too many of Gould’s creations in the mix, diluting the impact of any one foe especially when they were all under the influence of Al Pacino’s Alphonse “Big Boy” Caprice.

On the side of good there’s Glenne Headly as Tracy’s longtime love, Tess Trueheart; Charlie Korsmo as The Kid, Charles Durning as Chief Brandon, and Dick Van Dyke as District Attorney John Fletcher. Headly’s little girl voice has always annoyed me and she really didn’t have much to do, which meant she was easily eclipsed by the film’s real femme fatale: Madonna as Breathless Mahoney. 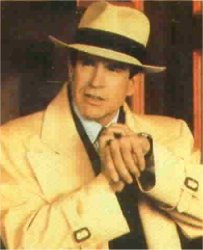 The script from Jim Cash and Jack Epps, Jr. is remarkably faithful to the golden era of the strip, with the blood-soaked streets of the big city, and a cops and robbers vibe. The main story involves the Kid witnessing a mob hit from some of Big Boy’s enforcers and the crime lord wants him silenced before a possible trial. And Breathless is the only witness to a kidnapping so Tracy spends quality time with her, where she does her best to seduce the square-jawed hero. And pulling the strings from the shadows is a criminal known only as The Blank, whose true identity is revealed late in the film and may surprise a handful of viewers.

The movie crackles along but even in the rewatching, just lacks a vital spark to make us care or cheer. The story and performances almost take themselves too seriously and when set against the uniquely colorful setting is more jarring than anything else. It’s not a bad film in the end, just not a very exciting one.

The digital restoration needs to be seen to be appreciated and Disney did a lovely job, The Blu-ray comes with a digital copy but neglects to include any extras to strongly recommend its acquisition.