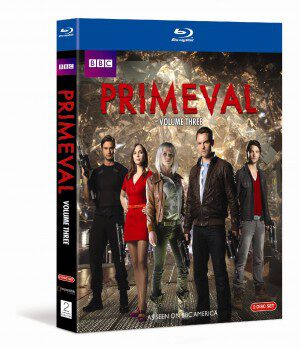 Thank goodness the wicked Helen did not bring about the end of mankind and civilization as we knew it. This meant the characters of ITV’s Primeval could come back for a fresh go-round. The show took a breather after the third season ended in 2009 and came back in seven and six episode arcs, making for abbreviated fourth and fifth seasons respectively and they are now available as a combined third volume in either standard DVD or, for the first time, as a Blu-ray option from BBC Video.

I find myself enjoying the series more for the characters than the writing, which either leaves holes as big as the anomalies the heroes deal with or are overly convoluted, leaving me wishing for a happy middle ground. 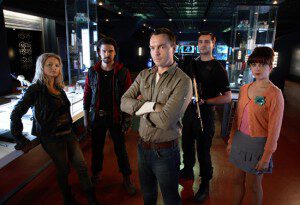 Season three ended with three of our heroes – Connor Temple (Andrew Lee Potts), Abby Maitland (Hannah Spearritt), and Danny Quinn (Jason Flemyng) – trapped in different eras of the past while life back at the ARC continued, presuming them lost but not dead. Still, the near destruction of reality meant a rethinking of the operation which allowed the creators – Adrian Hodges and Tim Haines – to retool the show a bit, mostly for the better.

The new installments open with Connor and Abby miraculous still alive a year after being trapped in the Cretaceous with minimal supplies. They look remarkably healthy and unscathed, including their clothes being intact. Their budding romance, there from episode one, has clearly deepened and they rely on one another until fate gives them a way home. They return and find things have changed including Philip (Alexander Siddig), a private entrepreneur, largely in charge in conjunction with the affable and posh James Lester (Ben Miller). The pair literally has to fight to regain their jobs and then begin picking up the pieces of their lives, although oddly, they seem unconcerned with those elements including Abby’s annoying brother NAME from the previous season.

Among the newcomers is young wunderkind coordinator Jess Parker (Ruth Kearney) and Matt Anderson (Ciarán McMenamin), a rugged field agent with his own mysteries which begin to tie into the convoluted meta arc that stretches across the thirteen installments.

Long last Danny finally returns and propels stories in other directions as well. But the most interesting new addition to the show is the time-tossed Ethan Dobrowski (Jonathon Byrne) and Emily Merchant (Ruth Bradley), with which much more could have and should have been done. One has a deep secret revealed later on and the other is an innocent, coming from the Victorian Era and trying to do what’s right but seems oddly unfazed by living in her future.

Speaking of the future, that too plays a role in the later installments as the anomalies grow in number, threatening the world with more creatures, and there’s Philip trying to harness the power to supply energy to the world. Everything gets whipped up into a frenzy that ties back to previous season threads and issues. The climax is noisy and explosive and then people dust themselves off and get back to work as a new mystery arrives to set up the next season.

All too often, the meta arc, which is dubbed New Dawn, is doled out in small pieces while the bulk of each episode is given over to the dinosaur of the week. Thankfully, CGI for television has improved to the point where each season, the creatures look better and better which is a plus for this season now that it can be enjoyed in Blu-ray. (And they look far more convincing than the dinos found on Fox’s Terra Nova.) On the other hand, ever since the very first episode, the show has always felt like the writers ran out of steam and let the dino battle consume too much screen time. The show has therefore found itself in an odd place between the dark and dramatic Torchwood and the whimsical science fiction of Doctor Who, but both feature far stronger writing.

The special features include New Dawn: Making the New Primeval, Part 1 (21 minutes) and Part 2 (16 minutes) covering the retooling and thinking that went into the new seasons. It starts off slowly but is worth sticking with as they move along as part one is all about season four and part two covers season five. There are also five webisodes that were produced to teased the series’ return and briefly cover what occurred while we were watching other shows. In the 17 minutes we discover season three addition Sarah Page (Laila Rouass), was lost during Captain Becker’s (Ben Mansfield) attempt at rescuing the missing trio.

The show looks good on disc and sounds fine. There’s a real goofy charm to the overall series and if you watch an episode every now and then, it’s a fine guilty pleasure. It’s not something that works best in a concentrated dose, and you certainly wish it were stronger, but as entertainment goes, a visit to the world of Primeval can be quite satisfying.