HANCOCK TIPS HIS HAT TO ‘HUNT AT WORLD’S END’! 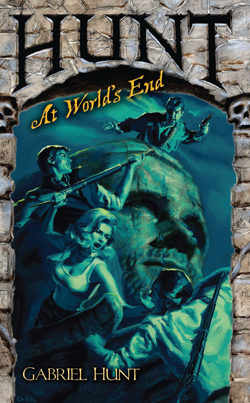 There’s something to be said for archetypes.   We enjoy them, we return to them, many sociologists and psychologists say that they are essential to our survival as individuals and a race.  And being a fan of Heroic Fiction and particularly of Pulp, I am darn glad that writers today believe in archetypes as well and don’t shy away from writing a story around a character who is like some previous creation or reminds readers of that guy in that movie.  Many good tales are written because writers, too, enjoy playing with archetypes.
Enter Gabriel Hunt.
Created by Charles Ardai, the genius behind the Hard Case Crime books, Gabriel Hunt is one of two brothers whose parents mysteriously disappeared and are believed dead.   The brothers are now entrusted with the operation of the Hunt Foundation, which Gabriel leaves largely to his brother Michael while he travels the globe rescuing lost artifacts from the wrong hands in efforts to give them to museums and, if necessary, saving the world in the process.
Sound a tad familiar?  Yes, there are definite shades of Indiana Jones and other such fortune and glory for museums types in Hunt.  But in this tale that opens with a bar fight in an Explorer’s type club and involves chasing down three jewels and an ancient Hittite device, Hunt definitely steps out as his own character.  This is both a blessing and a curse for the story.
The action is well paced throughout HUNT AT THE WORLD’S END, the third novel in the series, and leaps off the page at the reader.  The characters are engaging, colorful, and run the gamut of beautiful I-Can-Take-Care-of-Myself damsel, over the top villain, and even an ancient cult of scaries with worldwide membership thrown in for good measure.   The build up of and resolution of the adventure is nearly flawless.  And Hunt himself provides a heroic figure that the book revolves around easily.
Mostly.
It seems that many writers feel the need to write characters in Heroic Fiction today that will hopefully have a broader market appeal than typical concepts of Heroes as we see them.  There have to be flaws, there must be angst, there have to be internal complications that give breadth, depth and color to the hero, even in some cases making him seem less than heroic.  This is supposed to, I think, make him appear more heroic when he works his hero mojo.
In HUNT AT THE WORLD’S END, all this sort of characterization, most of it done as internal narration, accomplished was to make Hunt seem insecure, arrogant, and whiny.  The middle of the novel is bogged down with Hunt’s concern over a particular cast member being involved in their hunt, his love or interest or whatever he has in the aforementioned damsel, and there’s even a hint of regret for his chosen life thrown in.  All of this is fine if it’s handled correctly, but the way it’s presented in this book makes Hunt’s subsequent heroic actions seem hollow, false.
Another point about this book- and this is more the writer in me, not the reviewer, complaining- is the fact that it is written under a house name of the lead character.  Gabriel Hunt wrote the book and yet it’s in third person.  It would have been much more affective to have this tale told in first person and would have made some of the above mentioned issues with whininess a little easier for the writer- and the reader- to deal with.
THREE OUT OF FIVE TIPS OF THE HAT- HUNT AT WORLD’S END is a great actioner, wonderfully paced with plenty of derring do and baddies for the good guys to contend with.  I just wish I liked the hero more than I did and that maybe in this instance, the author would have stuck a tad more to the archetype than trying to broaden his reader base (that he was doing that is only my assumption, but still…this is my review).
Share