Michael Davis: The Next Level 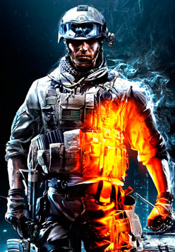 So there I was playing Battlefield 3 on my PlayStation 3 like the addicted gamer I am. Yes, gentle reader, this middle aged (I’ll be 26 in April…what?) is a serious no joke gamer.

You name the system I have it and it’s hooked up to my big screen in my living room. In fact, except for my office where I write this and my bathrooms, I have a gaming system in every room in my house.

At any given moment I’m playing four games at one time. One on the PS3, one on the X-Box 360 another on the Wii and yet another on an old you-never-heard-of system called a 3DO. Shit, sometimes I even break out the Dreamcast! If you don’t know what a Dreamcast is then you are way to young or way to jaded to continue to read this particular rant.

To this day I think Dreamcast is the greatest game system ever but then again I think telling a woman she does look fat in that dress is a good move, so what do I know? Like I said, there I was playing Battlefield 3 on my PlayStation 3 like the addicted gamer I am until I get to a level and no matter what the heck I do I can’t get pass this level. So when stuck like this what do I do?

Every major game release, of which the Battlefield franchise is one, has a strategy guide that costs a pretty penny and all I need do is consult said guide and I’m on my way to the next level.

What a waste of money.

I’m sure there are a zillion reasons to pay a grip for the strategy guide but the only reason I can see is to show me how to get pass a level I’m having an issue with. Anything other than that is a waste of my time and my money.

Why is the strategy guide a waste of money if it can help you get pass an impossible level?  Because real gamers don’t use strategy guides…they get the information free on the net. I freely admit I may be additive to gaming but I’m no where near as good as some people so I need help every now and then. Most hard-core gamers measure success in hours, as in how many hours it takes them to finish or “beat” a game.

It can take me weeks sometimes months to finish a game. In some cases I never finish a game. I just leave it until I can come back to it and figure it out. So, no, I don’t use the net to resolve every single road block I come across but I’m not a fan of  “puzzles” as in figure some shit out instead of shooting somebody to get to the next level.

I only resort to the net when something strikes me as so dumb (making me even dumber because I can’t figure it out) I no longer want to deal with it. That moment came in Battlefield 3 in a level called ‘ a rock and a hard place.’

I get to the part in this level where a Russian jet is tearing me and my team’s ass apart. To defeat this jet I have to find a stinger missile launcher and take it down. I find where the stinger is but there is no stinger and after about an hour of trying to equip the words that say stinger missile (only the word is there; the missile is nowhere to be seen). I’m pissed as shit so I go on the net to see what simple thing I’m missing.

The walkthrough on the net is simple enough, in fact I did every single thing it says to do on the walkthrough but I still cannot equip the stinger.

Do you know why I can’t pick up the stinger and blow the Russian jet out of the sky? Because the game has a glitch and no matter what the fuck I do I will never be able to grab that stinger because the game is corrupted, flawed, broken or whatever you deem is the right word for something that does not work in a video game.

I’m beyond pissed when I learn (on line) that this is the issue with the game that I paid $60 goddamn dollars for.

Then it hits me.

This is the reason video games are not doing anywhere near the business in the movie theaters that comics are doing. Except for one franchise, Resident Evil, video games made into movies are woefully lacking the punch at the box office that comics have in the film industry.

Video games have a massive legion of fans but cannot translate those eager thumbs from the controller to pulling out their wallets to buy a couple of movie tickets.  You would think that video game movies would be leading box office sales any and every weekend they debut.

Here’s my theory for what’s it’s worth why the video game industry still eats the dust of the comic’s industry when it comes to movies.

At the heart of the video game industries attempt to bridge the movie world is a great big glitch. Much like the glitch in Battlefield 3, which I now have to return to Game Stop and explain to them why it took me months to return the game.

Because it took me months to get to that damn level, Dick Heads…duh.

In a nutshell the video game industry is still a babe in the woods compared to comics. Comic book creators, publishers and even the evil empire that can be publishers have a long relationship with the other evil empire, Hollywood.

Hollywood and the creators of comic book content are at a point now (mostly) where we respect each other and (mostly) that respect results in movies like The Dark Knight.

Hollywood does not really respect the video game industry yet that’s why you get movies like Max Payne.

Great game franchise, movie not so much. Truth be told, I really liked that movie but then again I love the Max Payne games and I’m sure that accounted for the reason I liked the movie so much. It really tried (at certain points) to do the game justice.

Therein may lay the heart of the video game glitch, again in my opinion, to get a hit in Hollywood you just can’t depend on the fans of the original material. You are not driving a 40-year old woman dragged to see Max Payne by her husband into a video store no matter how bad she may like the movie.

And she won’t like the movie because it will make no sense to her because she has not played the game.

To put it another way, I loved the original David Lynch Dune movie. I loved it because I understood it having read the book. My date at the time, a Sunday school teacher, looked at me after the film and asked, “What the fuck was this about?”

Yeah, she was a Sunday school teacher.

Make no mistake, the video game will get it right and then all (except me because I’m Master Of The Universe!) will bow down to what will be the most powerful engine in the movie business. That is going to happen, when I can’t say but it’s going to happen.

Well that’s my two cents. Now I’m off to Game Stop (greatest store ever) to return Battlefield 3. I’m sure they have encountered this before and will have a fix all ready for me.

I wish I could say that about Hollywood and the gaming industry.