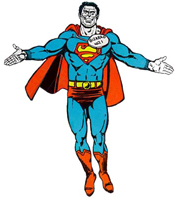 Ladies and gentlemen… We gather here today to mourn the loss of a cherished friend. DeeCee was many things to many people. Entertainer. Educator. Detective. Optimist. Friend. Let us take this time to recount those times that touched us, before DeeCee passed on into the ethereal void of blackness.

DeeCee, above all else, seemed impervious to the mortality we all must face. Since his birth in 1934 (back when we call just called him Nate Alypub) DeeCee has been one to cite the changing times as his own catalyst for reinvention. The world went to war, and with it, so did DeeCee. When our world became fixated on the cosmos above, did he not put on his space suit and power ring? Against his better judgment, DeeCee proudly sported a mighty and magnificent mullet in the late 80s. He was never afraid to put on a pair of cowboy boots. Let us never forget when we all thought he was dead, back in 1992. Even from those bleak times, he rose once again, stronger than ever. When the world grew grim and gritty, DeeCee broke his back in that tragic accident. But did he not pick himself up and reclaim his mantle without pause?

I want to take some time now too, to acknowledge DeeCee’s extended family. We were all crushed by the tragic end of his cousins Tan Gent and Elle Swirlds. DeeCee was always so proud of their accomplishments! I’m touched to see in attendance today DeeCee’s brothers, Vern Tigo and Wiley Storm. Vern, DeeCee was always quick to note how you were the sobering realist and macabre dreamer to his starry-eyed optimist. And Wiley… How could we ever forget when DeeCee adopted you, and kept you afloat during your more troublesome past?

DeeCee was rich in family, but even richer in friends. I see gathered here today a veritable pantheon of personalities, in support of the loss of our friend. Marv-El… we all know how you and DeeCee butted heads throughout your friendship. Before you moved out to Hollywood, you and DeeCee could always be seen sitting in the park, debating this and that. And who among us didn’t beam ear to ear when you two ended a years-long feud and amalgamated your friendship! Also among us are some of DeeCee’s friends from later in life… Val, Imogene, “Boom-Boom” Burt, Ava Tarr… so nice to see you all.

It may very well be the elephant in the room today, friends. DeeCee’s untimely demise was something so many of us saw coming. Who here didn’t scoff just a little this past spring, when he told us all about his trip to Flushing? “Everything will be different after this!” he told us. And we just let him go. He’s had these flights of fancy time and time again. Crisis after Crisis, did we not keep supporting him? He’s always bounced back stronger, we told ourselves. And sure, this trip didn’t sound like anything we hadn’t heard him rant about before. Time travel? Alternate futures? It’s all old-hat for DeeCee. Who would guess though that in a single splash, he would be forever lost to us all. Who among us today thought his last words were anything more than the usual hyperbole DeeCee was known for using?

But I digress. Today’s service isn’t meant to wallow in the demise of our cherished friend. DeeCee would want us to look to the future, as he always had. Most importantly, he would want us to acknowledge his biggest legacy, his son, DeeCee Jr.

Junior is just a week old, and it will be a challenge for him to live, thrive, and survive in these tough times. DeeCee’s legacy will live on in Junior. Though his first steps seem to have stumbled, let us all here in attendance support him here in his infancy. He has the world at his fingertips, and his potential is limitless. May he be inspired by the past, but now wallow in it. May he grow into his own man over time. Let the world adopt him with new eyes and old hearts. For within his gleaming eyes are infinite worlds of infinite possibilities.

Let us now rise, as DeeCee’s charred, limp, decimated body is lowered into the ground. Amen.