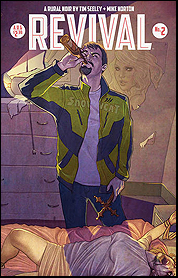 I admit it readers! I done ran outta things to complain about. So, like any amazing editor would, Mike Gold set forth a challenge. A simple one at that. “How about something(s) you really look forward to that aren’t DC or Marvel?” See? Simple! What a great excuse to highlight all those little known indie projects I dive into… like all the time. What better place to pimp the wares and projects that aren’t draped in NOWs or New52s. Where else could I wax poetic about those “next big things” all of you are fretting over!

And here comes the shocking truth. When it came to comics? Nothing came to mind.

Sure, there’s a litany of TV shows, movies, and music all coming out that I’d love to waste time discussing. Hell, I have a few seconds, so why not. I’m loving the last season of The Office. Parks and Recreation continues to be the funniest / sweetest show on TV.  Since House ended though, I’m just out of the drama verve.

It doesn’t help that I don’t watch TV until midnight, and barely last until half-past. Having a day job, making comic books at night, and being a freelancer adds up. In movieville… I know I have to catch Wreck-It-Ralph. Flight looked good too. Add in Lincoln and The Hobbit? And my dance card is plenty full. And in music? Robbie Williams just served up a huge slice of BritPop that I can’t get enough of. Seriously, watch the video for “Candy” and try not to get a little wiggle in your tuchas. But I digress.

When it comes to the world of comics, my “have to have it meter” is so very mainstream. This week, I came very close to buying some Image books that had cool covers… but I was lured away by my staples, Green Lantern, Animal Man, Swamp Thing, and the newly NOW’ed Iron Man. I’m not ashamed to admit what a mainstream whore I’ve been lately. But consider this article my wake up call. There’s too much good stuff out there for me to miss. And as an indie creator in the trenches too? It should absolutely be my duty to explore the lesser-knowns.

But where to start? With con season over, my “indie channel” is pretty much cut off until March 2013. This will mean, to me at least, my exploration of the unknown will be largely relegated to the independent rack space of my local comic shop (which is one third a s’mores in Chicagoland, if you get-the-drift). This means my attention will turn towards Dark Horse, Image, Boom!, Dynamite, IDW, and their brethren. And let’s just make it a hard and fast rule – no licensed comics. Sorry to be mean, but frankly every time I’ve tried one, it comes across more as fan-service than an original leap of interest. I know that’s bull-headed, so I welcome your flaming comments below.

I guess somewhere in between these random thoughts lay the issue so many of the smaller publishers and true indie creators are suffering through these days. With CBR, Bleeding Cool, and Newsarama covering the Big Two (and A Half if we count “everything else”), there’s few hubs that I know of online that really explores the other side of the forest. And let us not fool ourselves. Marvel and DC dominate the ‘cape’ market. Boom! had a hit with Irredeemable/Incorruptible, but that ship has sailed. And try as hard as they might, Dynamite’s ‘Let Alex Ross Do Whatever He Wants’ business model burned me one time too many. Hand to Buddha? Image is my last bastion of street cred these days. Doesn’t hurt that Revival is one of the best books being produced today. The key then is to find more like it.

Suffice to say, I’m truly not picky. Prior to picking up Revival because I actually know the creators… I wasn’t one for horror or zombie books. Now? Paint me grey and call me Charlie. The clear ideology of numbers would tell me that the indie scene is rife with genres I’m not presently enjoying. Is there an amazing western, sci-fi, comedy, romance, or mutt of a comic series I can jump into? There’s one place I know instantly to turn to – you.

I throw myself on the mercy of you, the nerd court. I beg of you to pelt me with suggestions of books I’m missing. And then you can follow my thoughts, good or bad, over at Michael Davis World. Shameless cross-promotion? You bet your sweet bippy.