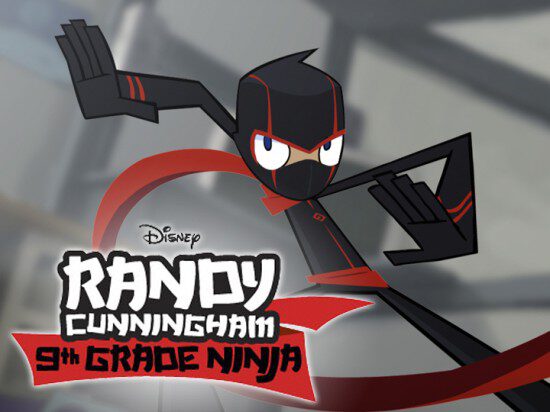 To take a term from the show’s own lexicon, Randy Cunningham, Ninth Grade Ninja is the straight-up cheese.

The latest animated series from Disney XD, part of a new edgy very non-Disney stack of shows that includes [[[Phineas and Ferb]]] and [[[Gravity Falls]]] (about which I should rightly wax rhapsodic another time) Randy Cunningham is a freshman at Norrisville High School, a school and a town who have been protected by a mysterious ninja for eight hundred years. What is not known by the populace is that The Ninja is a high school student; a new Ninja is selected from the freshman class, and they serve until they graduate, when a new frosh is chosen.  And this time around, young Randy Cunningham is chosen. In his bedroom, a mysterious box appears, containing the Ninja’s mask and the tome of secrets, the Ninjanomicon. It’s now his job to protect the town and school from villains like Hannibal Mc Fist, underappreciated evil genius Willem Viceroy III, and the Big Bad of the series, The Sorcerer, voiced by the can-do-no-wrong Tim Curry. (OK, we’ll ignore The Worst Witch – he was but a lad at the time.)

At its core it’s a buddy comedy – Randy and his friend Howard Wienerman fight  the hordes of chaos, while still trying to become popular and get to class on time. Howard is the archetypal “Fat Friend”, seen most recently in the form of Nick Frost when paired with Simon Pegg. Ninjas are So Hot Right Now, and the show does a good job of balancing the classic semi-mystical powers of the shadow warrior with the modern take of a teenager in the suit.  The Ninjanomicon is quite reminiscent of The Phantom’s archives – the book is covered with notes in the margins from past ninjas as advice and explanation to the new guy.

The character designs seem very similar to the people from [[[Invader Zim]]], and with good reason – Bleeding Cool reported that Zim-creator (and conspirator) Jhonen Vasquez did character designs for the show.  He’s been sharing much of his work on his Tumblr page.

Lots of story to be explored, too, mostly about the history of the suit.  Will we meet any past wearers of the suit?  Have any ninjas not made it through all four years?  The show’s only a couple of episodes in, so there’s lots of time to explore all that. Till then, sit back and enjoy a solid adventure series with a lot of laughs.