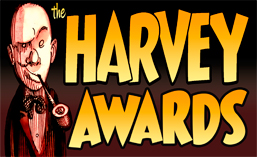 We’re very happy to announce that the Harvey Awards have upgraded their web site (with a little help from us) and is now able to take votes directly online instead of downloading a ballot and emailing (or even just mailing, shudder) it back. It is hoped that this will increase the voting turnout tremendously.

The final ballot for 2012 closes next Friday, August 17th, so get your votes in now if you haven’t already. Please remember that only comic book professionals – those who write, draw, ink, letter, color, design, and edit comic books and graphic novels – are eligible to vote.

The 2012 awards will be handed out at the Baltimore Comic-Con on September 8th. We hope to see you there!

Named in honor of the late Harvey Kurtzman, one of the industry’s most innovative talents, the Harvey Awards recognize outstanding work in comics and sequential art. Nominations for the Harvey Awards are selected exclusively by creators – those who write, draw, ink, letter, color, design, edit, or are otherwise involved in a creative capacity in the comics field.  They are the only industry awards both nominated and selected by the full body of comic book professionals. The awards have been presented annually since 1988.