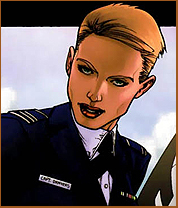 There is a wonderful thing happening for me and other girls and women who read comics.

A new hero has appeared.

As frequent readers of this column should remember, Kara Zor-el, Supergirl, was the character and hero that rocked my pre-adolescent world. She was smart, brave, and not only did she have the same powers as Superman but she was his secret weapon, which is a powerful message to little girls. And yes, she was pretty, which I don’t think is a sexist thing to say. Everybody wants to be “pretty” when they grow up. Okay, little boys generally don’t want to be pretty when they grow up, but I don’t think they want to look like Quasimodo either.

Not that little girls and women have been without heroes since Kara first popped out of her rocket in Action Comics #252 in May, 1959. Wonder Woman, Princess Diana of Themiscrya, has been with us since All-Star Comics in December 1941.   Jean Grey debuted as Marvel Girl in X-Men #1 in September 1963, and Storm – Ororo Munro – was created in Giant Size X-Men #1 in May 1975. Kitty Pryde – she of the 1,001 names–joined the Uncanny X-Men as Sprite in January 1980. The introduction of the Legion of Super-Heroes in Adventure Comics #242 in April 1958, included Saturn Girl, a.k.a. Imra Ardeen.

And then there was Carol Danvers.

Major Carol Danvers of the United States Air Force first appeared in Marvel Super-Heroes #13 in March 1968. In 1977, Carol was empowered by the fusion of her body with Kree genes, and became Ms. Marvel, appearing in the eponymously titled Ms. Marvel #1 in January 1977. She has also been known as Binary and Warbird.

And then, in July 2012, Carol Danvers accepted the mantle of Captain Marvel

Kelly Sue DeConnick, as writer of the series, has taken the ball and run with it. In fighter jock parlance, DeConnick – and through her, Carol Danvers – is pushing the envelope of what it means to be a woman and a hero. To quote DeConnick from her interview with Corrina Lawson in Lawson’s Geek Mom column for Wired magazine, “My pitch was Carol Danvers as Chuck Yeager.”

As the daughter of P-51 fighter jock, I get it. Completely.

Knocking out Absorbing Man by smothering his air supply with impermeable sash.

Comparing the hurt she’s gonna feel knocking out a gi-normous alien eyeball to the pain of a mascara wand in her own eyeball.

Girls and women get that.

‘Cause that’s what we do.

‘Cause that’s what Carol Danvers does. And if we said to her, “Man, Carol, you surely are our hero.”?

‘Cause that’s what a hero does.